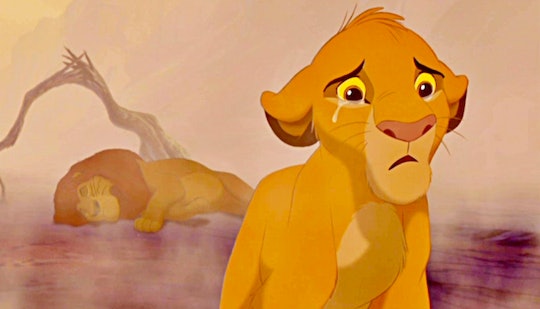 Pretty much everyone has grown up with Disney movies, which means you likely remember the first time you saw an animated character that you loved (or hated!) die. But it turns out that watching Mufasa die in the stampede in the Lion King or realizing that Bambi's mom was shot in the forest isn't as traumatic as we might think it is. According to a recent study, researchers think that Disney movies can help kids understand death — or, at the very least, start to process the concept.

As Business Insider recently reported, researchers Kelly Tenzek and Bonnie Nickels from the University of Buffalo studied 57 Disney and Pixar movies and counted 71 character deaths. It's not just the depiction of death in general that the researchers were interested in. They found that in those deaths, there are teachable moments for parents, such as talking about the cause of death, or whether the death was shown or implied, and if the character was a good guy or bad guy.

Turns out, kids are getting messages about death from movies a whole lot more than adults do in their media. According to the research, Tenzek and Nickels found that death is depicted twice as more in "kids" movies than in adult ones. Who says kids are sheltered these days?

These are important conversations to have with children, but waiting until the end of life is way too late and can lead to a poor end-of-life experience. We believe that Disney and Pixar films are popular and accessible for children and adults so that a difficult conversation can begin in a less threatening way earlier in life.

Often in Disney films, a villain will fall to their death, like Mufasa in the Lion King or Gaston in Beauty and the Beast. This is a good device for the storytellers, since it gets rid of the villain without making the hero do something immoral. But talking to a child about why they're cheering for a death, even if it's Scar, is another way to impart lessons about morality and mortality.

Obviously, it's up to parents to decide what's best for their kid and to use some judgement about what age you want to start talking about death in your family. According to Business Insider, Tenzek explained:

We acknowledge a child's psychological development is important when considering these discussion. It's not our intent to have these conversations with a three-year-old, but as children mature, then the films fit naturally into that growth.

Not all of Disney's character deaths are realistic, and not just because they're talking animals. Sometimes, characters die and then come back to haunt people, even in a friendly way. Think Auguste Gusteau, the ghost chef in Ratatouille or how Mufasa appears to Simba in the sky when he needs him most in the Lion King.

There are also transformations that can be confusing for little people. Such as Maleficent in the original Sleeping Beauty, who mutates into a dragon to fight Prince Phillip, but appears as just a robe after she's killed. This, Tenzek told the outlet, is just "a chance for a child to better understand the difference between fiction and real life."

Other times, characters get really, really hurt — like Trusty in Lady and the Tramp — and it's not clear if they're going to make it. (That one hit me hard, back in the day.) But, according to this study, it's all just more fodder to use to help your kids understand sickness, death, and grief as they respond to the movies or real life events.

Of course, using a Disney movie isn't the only way to talk to kids about a loved one's death. According to Psychology Today, parents should be prepared to get a wide range of reactions and emotions from kids while they process mortality. And although Disney movies might be a good tool, using realistic terms such as "died" and "dead" is often better in the long run, instead of using more ambiguous terms like "passed away" or "crossed over," the publication noted.

They might not be the perfect tool, but Disney movies are definitely a good place to start picking your child's brain about how they feel about death or what they already know. It's not an easy task, but if watching Bambi helps, so be it.