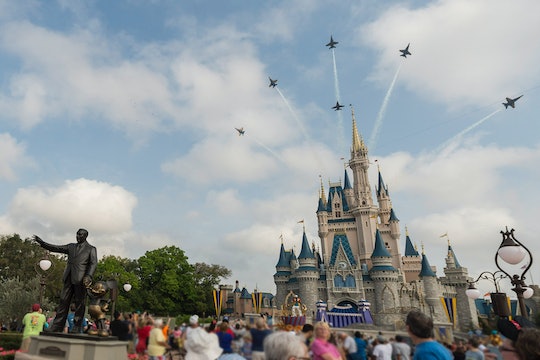 Disney Park Price Increases Over The Years Will Absolutely Shock You

Disney is known as the happiest place on Earth. Almost every kid grows up dreaming about going there — TBH, I'm almost 30 and I'm still mad my mom never took me. The fact of the matter is making that dream come true comes at a cost, and over the years it's gotten significantly more expensive. Taking the whole family to Disney doesn't come cheap. In addition to flight costs, hotels, and food, a trip to the park can be pricey. Plus, prices have been steadily rising over the years, meaning your Disney dreams aren't getting any more attainable. Disney park price increases over the years will absolutely shock you. Prepare to be crushed.

Disney parks in Florida, California, and other parts of the world have gotten seriously costly, according to new research from Play Like Mum and Flight of the Navigator. No two parks cost the same amount, and some have gotten more expensive than others over the years. Per the study, Disneyland Resort in California has increased prices the most of any Disney park with a 5,060 percent increase in the last six decades. When the park opened, it cost only $2.50 (!!!) to get in. Nowadays, admission sits at about $129, depending on how long you plan to visit and at what time. As noted on the park's website, a two-day pass starts at $112.50, and decreases the more you plan to visit.

Like Disneyland, Walt Disney World in Orlando, Florida, has increased prices significantly since it's opening. Research showed that prices have gone up 3,014 percent. Play Like Mum said its opening price was $3.50, but now its website lists a one-day ticket as starting at about $109, which is a significant change.

To gather this information, Play Like Mum looked at each Disney resort, with the exception of Shanghai Disney Resort which opened most recently, and took a look at the price of a one-day, single park ticket in the last 60 years. Current price info was gathered by looking at official park websites, while older prices were gathered using the Wayback Machine and other sources like Ians World, All Ears, Dis Geek, eBay, Trip Advisor, and more.

Although you may not be able to afford to whisk your family away to Disney, you can bring Disney to you for much cheaper. INSIDER reported in April that Boxney, a subscription service, was delivering popular Disney World treats to your home no matter where you lived. Each item in the Boxney box was handpicked by staffers from Magic Kingdom, Epcot, Animal Kingdom, Hollywood Studios, and Disney Springs, according to INSIDER.

Subscribers could pick from three different box options. In the past, as INSIDER noted, Goodie Box Minis were filled with popcorn, lollipops, cookies, and sour candies from Goofy's Candy Company. Worth every penny, if you ask me. One-time buyers and monthly subscribers would receive similar treats in their boxes. It appears, however, that the service may now be defunct.

Those hoping to experience a little of the magic at home can still shop the Disney store and order gifts and more straight from the most magical place on Earth. Treats are available from My Disney Shop, too, so you can get a taste of the parks at home.

Disney may still be the dream, but with prices increasing year after year, it will always be just that for some families. Fortunately there are plenty of ways to get the Disney experience without shelling out your life's savings.