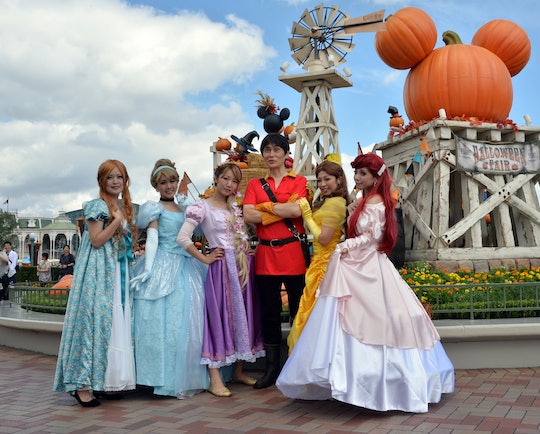 My niece called me "Beauty" when she 3. As in "Sleeping Beauty." She was "Belle." Those were our roles when we played and there was absolutely no straying from the script. My role was to sleep and wait for a Prince who would never come, while she twirled in a yellow dress and sang with washing dishes. Because what little girl doesn't love to "play" at being a Disney princess? How dangerous can it be? Well, according to a new study, these Disney princesses could be giving little girls a crash course in stereotyping, according to a press release from Brigham Young University.

Disney princesses (Cinderella, Snow White, Sleeping Beauty, Belle and co.) have been whipping little girls into a frenzied froth of twirling dresses and castles full of talking animals for decades. Playing at being a princess is such a common theme for little girls that it has almost become a rite of passage, a sort of currency between little friends. "Want to have a princess tea party?" "Which princess do you like the best?" "I'm going to be (insert Disney Princess here) for Halloween!" But a study published in Child Development Magazine involving 198 preschoolers focused on gender-stereotypical behavior and the relation to the Disney princess franchise tells a potentially grim story.

Sarah M. Coyne, a family life professor from Brigham Young University, conducted research for the study. She found that exposure to the Disney princess culture could encourage damaging stereotypes. The study involved exposing the preschoolers to a variety of mediums (watching princess movies, playing with toys) and then had them complete a few tasks, like sorting toys between "girl" toys, "boy" toys, and "gender neutral" (puzzles, crafts, etc.).

After a year of Disney princesses, the study found that the children with the most exposure were far more susceptible to gender stereotyping — boys included. And while in the case of the boys that happened to be a good thing (the boys were more helpful and had better body image overall), the girls were more of a concern, Coyne said, according to a press release:

We know that girls who strongly adhere to female gender stereotypes feel like they can’t do some things. They’re not as confident that they can do well in math and science. They don’t like getting dirty, so they’re less likely to try and experiment with things.

And it wasn't just the gender stereotyping that cropped up as an issue. Girls with body esteem issues tended to engage longer with the idealized Disney princess heroines, possibly as role models or examples of who they might like to be, Coyne said, according to the BYU release.

Disney Princesses represent some of the first examples of exposure to the thin ideal. As women, we get it our whole lives, and it really does start at the Disney Princess level, at age three and four.

Disney did not immediately respond to Romper's request for comment regarding the study.

While Coyne isn't encouraging parents to eradicate exposure to the Disney Princesses, she recommends moderation and making sure your children have a wide variety of interests. It's also important to note that there are a number of new Disney princesses who don't fit the gender stereotyping mold as much.

Additionally, much of this stereotyping can be stopped by parents and society. When adults are complimenting the little girls in their lives, perhaps they should use different language. Instead of "you're so pretty" or "what a sweet little princess," it's a good idea to compliment young girls on their strength, their intelligence, their kindness — all of the qualities we want them to foster and nurture.

And let's remember, the Disney princesses have many redeeming qualities other than slim figures and pretty faces. Many of them have to overcome nearly insurmountable odds to find their happy ending. They are excellent friends to people and animals alike. They are full of hope and curiosity. And one Princess in particular... why, she's simply Brave.

All little kids want role models for their imaginative play. The Disney princesses can be a healthy outlet, but that doesn't mean they should or will be the only outlet.

More Like This
Princess Charlotte Is Ready To Be A Soccer Star, Too
North West Flips The Bird During Family Photos
WowWee’s New Fairy Finders Will Keep Kids Distracted For Hours
The Covid Vaccine For Kids Under 5 Has Been Sent To The FDA For Review