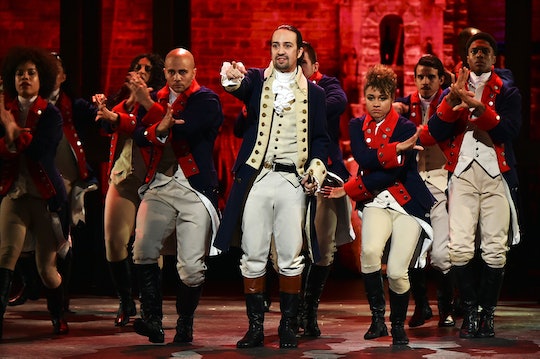 If you never managed to snag tickets to Hamilton, you might want to invest in a Disney+ subscription so you can catch the Tony-award-wining musical when it hits the small screen next month. Disney+ released the official trailer for Hamilton Sunday, less than two weeks ahead of the Broadway production's July premiere.

While nothing can fully replace the experience of seeing a Broadway production live and in person, plenty of fans will happily settle for a filmed version of the musical phenomenon. Shot onstage at The Richard Rodgers Theatre in New York City in 2016, Disney+ has said the film combines "the best elements of live theater, film, and streaming" to create "a cinematic stage performance that is a wholly new way to experience Hamilton." Judging by the official trailer Disney+ released Sunday, viewers can expect an intimate look at the action unfolding onstage.

What's more, Miranda has praised the film version of Hamilton and its release on Disney+ for increasing people's access to the musical. "No one can predict the way a work is received, and the way Hamilton has been received has surpassed everyone's wildest dreams, but our biggest issue has always been accessibility," Miranda told Good Morning America on Monday. "So I'm really glad. We had the luxury to basically shoot an independent film in our first year, and now the world can see what it felt like to be in that room in June 2016."

A ticket to a live Hamilton performance often cost hundreds of dollars, according to the Wall Street Journal. With Hamilton's upcoming arrival on Disney+, viewers will be able to see the famed Broadway musical for the cost of a Disney+ subscription, which begin at $6.99 a month.

Although originally scheduled to hit the streaming service in Oct. 15, 2021, Disney announced in May that it had decided to "fast track" Hamilton's streaming premiere by more than a year. Instead of becoming available to Disney+ subscribers in October 2021, Hamilton will hit the platform July 3.

At the time, executive chairman of The Walt Disney Company Robert Iger said the decision to bump up Hamilton's release date had been heavily influenced by ongoing current events. "No other artistic work in the last decade has had the cultural impact of Hamilton — an inspiring and captivating tale told and performed in a powerfully creative way," Iger said in a statement. "In light of the extraordinary challenges facing our world, this story about leadership, tenacity, hope, love and the power of people to unite against the forces of adversity is both relevant and impactful."