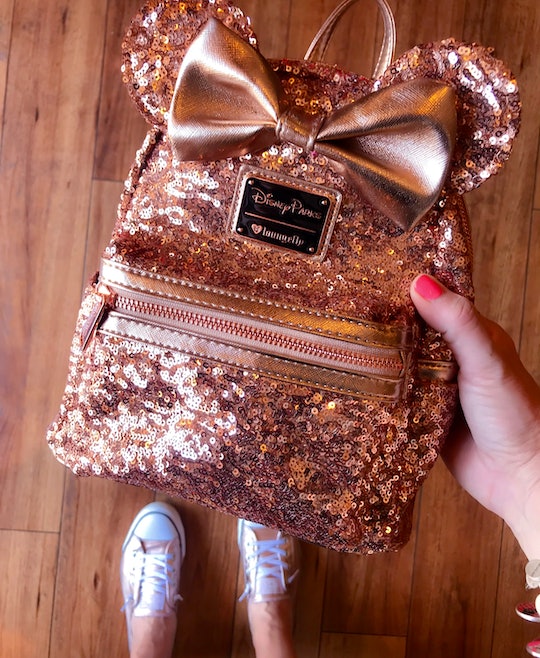 There's really no shortage of magic when it comes to Disney — no matter if you are an actual kid or kid at heart. So it's no surprise that when the company launched rose gold Minnie Mouse ears last fall, people were tripping over themselves to score a pair. But the latest reveal might put even those ears to shame (or, perhaps, give way to an entire outfit of sequined rose gold attire) because Disney rose gold backpacks have launched and they're kind of amazing.

It's true: The company unveiled the sparkling beauty at Disneyland yesterday and it even comes complete with a matching wallet that's the sweetest accompaniment to the all-things-sparkly bag. But before you get too excited, it should be noted that the darling duo is only available at Disneyland. There's no word yet on exactly when the products will be available at Walt Disney World, but Disney Style's Instagram story noted that the accessories will be coming to Disney World and their online store, shopDisney.

But if you do happen to be on the West Coast, then you'll find the backpack and wallet at Disney Clothiers, Ltd., Elias & Co., and The Disney Dress Shop, according to the DisneylandAP Twitter.

Kristen Mattern (@firstcomesdisney) wrote on her Instagram that she scored the Disney Loungefly backpack ($85) and clutch ($50) at Disney Clothiers Ltd. on Main Street. Her photo of the sequined backpack paired with matching rose gold Converse sneakers prompted hundreds of comments, including: "omg that is so cute and sparkly."

Of course, it's not the first time that Disney has launched a product that had its fans swooning. In fact, when the company released the rose gold sequined Micky ears, people began blogging about different tactics for scoring a pair of the highly sought-after headwear. Patty at My No-Guilt Life created an outlined post with tips that include making sure to "follow social media for clues to find rose gold Minnie ears at Disney.

"As soon as someone finds a stash, they post it on Facebook or Instagram," Patty wrote. "If you spot the hashtag in current use and are at the parks, start asking Cast Members where you might be able to find them. If you are at home and see a friend posting online about them, you might want to shoot a text or PM real quickly and see if they are up for doing you a solid."

I mean, no one ever said Disney lovers didn't know how to get down to business, am I right? (TO DEFEAT... THE HUNS.)

Of course, this summer it might be all things sparkly that have Disney goers pumped, but last August it was the unveiling of the wine slushie. It all started when Disney Food posted a photo of a gorgeous pink slushie atop a table at Amorette's Patisserie in Disney Springs and visitors immediately became hyped to score one. The slushie is available in strawberry shiraz and mango moscato, and I've heard they pair nicely with Amorette's other goodies, like chocolate covered strawberries, New York-style cheesecake, crepes, and French eclairs.

Other exciting launches include jewelry and, really, how can you go wrong with that? In May, Disney paired with Tiffany & Co. to release a Disney Cruise Line-inspired necklace for guests aboard the Disney Fantasy cruise line. "The one-of-a-kind piece is a sterling silver, two-heart pendant on an 18-inch chain," according to Disney Parks Blog.

But if you aren't going to be visiting a Disney attraction anytime soon, there are a few ways to enjoy the magic from the comfort of your own home. Pop in a beloved classic and watch with your little ones or take to eBay to see if anyone is auctioning something rose gold and shimmering. You just might discover that Disney magic really can follow you wherever you go.