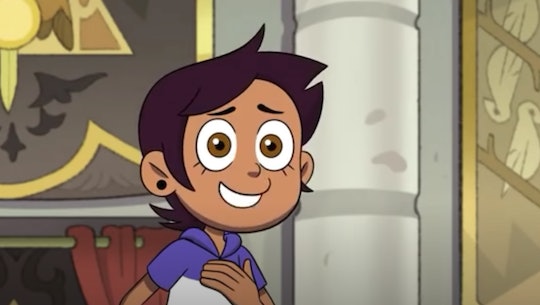 Representation and diversity in children's media is incredibly important, so when Disney debuted its first bisexual lead character in the animated show The Owl House, many parents are undoubtedly celebrating right alongside the show's creator. The Owl House, which premiered in January, follows a young Dominican-American teenage girl named Luz Noceda, who decides to pursue her dreams of becoming a witch after she stumbles into a strange realm.

The show's creator Dana Terrace confirmed the detail in a series of tweets after a prom-themed episode aired on Aug. 8. "I'm bi!" Terrace wrote on Twitter. "I want to write a bi character damnit! Luckily my stubbornness paid off and now I am VERY supported by current Disney leadership. Not to mention the amazingness of this crew."

The episode showed Luz dancing with a female character, Amity, who seems to have a crush on her, according to Entertainment Weekly. Previous episodes of the show had shown Luz displaying affections for male characters too, as The Hill explained. Terrace said that when the show was given the green light in 2018, she was warned against depicting LGBTQ+ relationships on TV, but things have since changed. Terrace thanked Disney Television Animation Director Doug Bensimon for his support.

The official Disney Television Animation Twitter account tweeted support for the couple shortly after the episode aired. "From enemies to enchanted dance partners, who else loves seeing Luz and Amity's relationship grow stronger?," the account asked.

This past year has been important for children's networks like Disney and Nickelodeon when it comes to recognizing characters' sexual identities. In February 2019, Disney Channel's first openly gay character came out in an episode of Andi Mack, and the Pixar animated film Onward, which came out in March included a lesbian character. Additionally, Pixar's first gay main character made his debut in Out, a short exclusively on Disney+ that premiered in May. And in June, Nickelodeon recognized cartoon character SpongeBob Squarepants as a member of the LGBTQ+ community.

"Representation matters!" Terrace tweeted after the episode aired. "Always fight to make what YOU want to see! As Owl House continues I can't wait to explore things that are important to me and my crew. Looking forward to the next chapter."