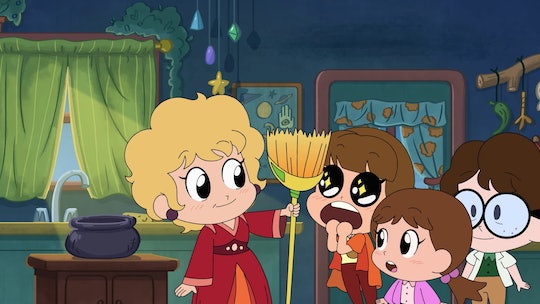 If you're looking for a sort-of-spooky way to kick off October, mark your calendars because the Disney Channel is releasing a cute retelling of Halloweentown. Ahead of its premiere on Oct. 4, Disney has shared an exclusive look at the adorable Chibi characters' spin on the classic Halloween movie.

As a refresher, Halloweentown tells the story of siblings Marnie, Dylan, and Sophie Piper who discover their grandmother, played by the late Debbie Reynolds, is a witch living in Halloweentown and that Marnie herself is ready to go into her witch training. The kids have to save the day in Halloweentown when an evil force takes over the town.

The original Halloweentown came out in 1998 as a made-for-TV movie on the Disney Channel and became an instant cult classic, with three more movies in the franchise being released in 2001, 2004, and 2006, all of which can be streamed on Disney+.

This new version sees the three Piper kids visiting their grandma Aggie, getting all embroiled in their new adventures like flying on a broomstick and getting into a taxi driven by a skeleton, and saving the day without saying a word. Reimagined as cute little cartoon characters. Take an exclusive sneak peek below.

The second installment of the Halloweentown shorts is an original story called Haircut, featuring Aggie taking her granddaughter Marnie for a haircut from a werewolf hairdresser named Wolfie. Marnie panics and makes a run for it, leading to a wild chase through Halloweentown. Look for this short on the Disney Channel and Disney Channel YouTube on Oct. 11.

And finally, First Date Fright will drop on Oct. 18 on the same platforms. This short sees Marnie on a date with Luke, where she is treated to live tentacles, worm pie, and eyeball soup for their romantic supper. Again, all done without anyone saying a word.

Halloweentown isn't the only Disney classic getting a Chibi makeover. Fan favorite Phineas and Ferb has gotten the adorable treatment for several shorts as well as Big Hero 6 The Series and Amphibia. But with October finally here, let's face it. It's all about Halloweentown.

More Like This
'Hocus Pocus 2' Officially Has A Release Date To Look Forward To
20 Of The Best Movies To Watch This 4th Of July
Lyle, Lyle, Crocodile Is Heading To The Big Screen As A Musical Comedy
20 Family-Friendly Movies To Watch With Your Kids On The 4th Of July