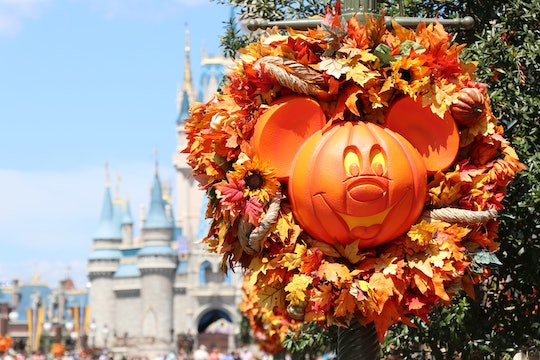 This Halloween season, the masters of fantasy at Disney Parks are giving their devoted fans one more reason to plan a trip to the festive theme park this fall. That's because Disney's Oogie Boogie Bash at Disney California Adventure Park will serve — wait for it... — boozy treats to the grown-ups celebrating at the spooky bash.

This year's party is called Oogie Boogie Bash, and it's themed after a Nightmare Before Christmas. Disneyland’s website calls it a “family-friendly Disney Halloween party where Oogie Boogie…has summoned the Disney Villains to Disney California Adventure Park for an unforgettable night of fun and fright.” And, of course, costumes are encouraged.

What’s really new about the event is that it will feature alcohol served "openly," according to Delish and PureWow, though it's not clear just yet what kind of drinks will be served or what the costs will be. Openly selling alcohol isn't common for the California Disney parks, which typically only serve alcohol at select restaurants, according to The Independent, but at this party, parents and adults can enjoy the spooky event with a fun beverage in hand.

Even if you don’t like to imbibe, there will be plenty of treats available for yummy fun. Candy cauldrons will be placed around the park, and specialty food like themed funnel cake fries and riced crisp treats will be for sale, according to People.

The park will be decked out for the occasion in true Disney splendor. Carthay Circle on Buena Vista Street will feature rotating image projection through the night that will showcase Maleficent’s vines breaking the building down, candy corn cascading from the windows, bats, and, of course, Oogie Boogie himself, according to Collider.

The Frightfully Fun Parade will be coming over from Mickey’s Halloween Party, where it previously ran, and a DescenDANCE party will be held on the backlot of Hollywood Land, as Collider reported. Disney villains like Ursula, Maleficent, the Evil Queen, and the Shadow Man will also be roaming the park, as People reported.

A highlight for many guests may be viewing the new show Villainous!, a brand-new production that tells the story of a little girl who doesn’t quite fit in to her suburban existence. It features a timely message of self-acceptance and confidence that parents and kids alike will appreciate, in addition to the usual high-quality Disney entertainment value.

Tickets for Oogie Boogie Bash are on sale now for between $110 and $145 on Disney’s website, and good news — children under 3 years don't need a ticket. The spooky party will take place on Sundays, Tuesdays, and Thursdays between Sept. 17 and Oct. 31. And if you’re interested in attending, you might want to look a tickets ASAP, as several dates are already sold out. The party starts at 6 p.m., but the website says the ticket allows entrance to the park up to three hours before event time on Tuesday and Thursday (excluding Oct. 29 and 31) and four hours early on Sundays.

So alert the troops, book your tickets, plan out your costumes, and, if you're like, get ready to indulge in fun adult beverage while celebrating Halloween with your favorite Disney characters.