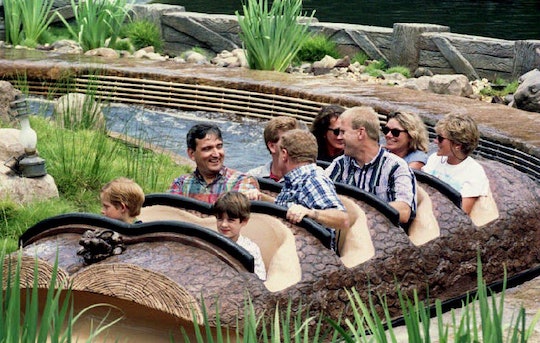 After more than 20,000 people signed a petition calling for change, Disney's famous theme park attraction Splash Mountain is set to undergo a bit of an update with a wonderful new theme. Soon, the ride will be inspired by the beloved 2009 animated movie The Princess and the Frog.

The original Splash Mountain attraction was opened in 1989 and themed after the racially problematic Disney film Song Of The South from 1946. Song Of The South was based on the Uncle Remus stories written by Joel Chandler Harris, all about a young boy learning life lessons through the fables of Brer Bear and Brer Rabbit. The film has come under massive criticism for its racist undertones for the way it depicted slavery by whitewashing over the actual struggles of Black people, so much so that it was not included on the Disney+ streaming platform.

"I’ve felt as long as I’ve been CEO that Song of the South — even with a disclaimer — was just not appropriate in today’s world," Disney CEO Bob Iger told Deadline in March. "It’s just hard, given the depictions in some of those films, to bring them out today without in some form or another offending people, so we’ve decided not to do that."

In light of the recent protests that have broken out across the country over hundreds of years of systemic racism against Black people in America, a Change.org petition was started at the beginning of June asking Disney to consider a new theme for Splash Mountain — specifically, a Princess and the Frog-themed ride. "Princess and the Frog is a beloved princess movie but has very little representation in the parks," the petition pointed out. "Tiana could be one of the first princesses with a thrill ride, as well as giving her a much deserved place in the parks."

And just weeks later, Disney announced its plans to do just that, although the company said in a blog post Thursday that plans have been in the work to update the ride since last year.

According to a recent Disney Parks blog post, that the Splash Mountain attractions in both Disneyland in Anaheim, California and Walt Disney World in Orlando, Florida will be "completely reimagined."

"The theme is inspired by an all-time favorite animated Disney film, The Princess and the Frog," Michael Ramirez, public relations director at Disneyland Resort, wrote in a Disney Parks blog post. "We pick up this story after the final kiss, and join Princess Tiana and Louis on a musical adventure — featuring some of the powerful music from the film — as they prepare for their first-ever Mardi Gras performance."

Anika Noni Rose, the actress who voiced the character of Princess Tiana, said in a statement shard on the Disney Parks blog that she's really excited "to know that Princess Tiana’s presence in both Disneyland and Magic Kingdom will finally be fully realized!" "As passionate as I am about what we created, I know the fans are going to be over the moon," she said. "The Imagineers are giving us ‘The Princess and the Frog’ Mardi Gras celebration we’ve been waiting for, and I’m here for it!" She also shared the exciting news on Instagram.

The announcement went on to note that the "the retheming of Splash Mountain is of particular importance today." "The new concept is inclusive — one that all of our guests can connect with and be inspired by, and it speaks to the diversity of the millions of people who visit our parks each year," Ramirez said.

While both parks remain closed due to the COVID-19 pandemic, plans are in the works for a fresh new theme on a popular attraction. Out with the old, in with the new.