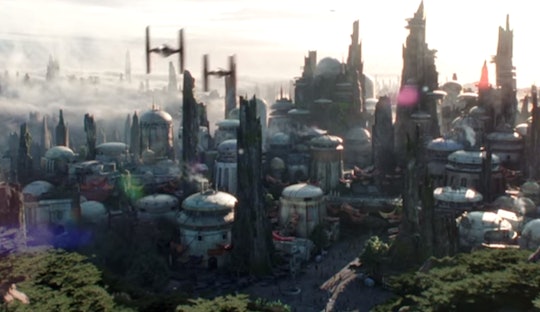 It's a vacation that's been years in the making, but Disney's Star Wars lands finally have opening dates, so start socking away your extra cash and get ready to travel to a galaxy far, far away... Or just the closest coast, really. The parks, called Star Wars: Galaxy's Edge, will open in the summer of 2019 at Disneyland in California, followed by Florida's Disney World in the late fall, according to USA Today. The attractions will feature two major rides: one in which guests will be immersed in a battle between the First Order and the Resistance, and another where they can pilot the Millennium Falcon on a secret mission.

Galaxy's Edge will be set on the planet of Batuu, a location that will be unfamiliar to most fans. It it mentioned in an excerpt of the upcoming Star Wars novel Thrawn: Alliances, though, which describes it as being on the edge of the Unknown Regions. The Disney Parks blog calls it "a remote outpost on the galaxy's edge that was once a busy crossroads along the old sub-lightspeed trade routes," and Wookieepedia, an unofficial but highly credible source, notes, "In the years after the Galactic Civil War, it was a safe haven for those looking to hide from the First Order. At one point both the Resistance and the First Order had a presence at the planet's outpost."

Another Disney Parks post delves further into the description of Batuu, stating that it's "a thriving port for smugglers, rogue traders and adventurers traveling between the frontier and uncharted space," which sounds a lot like a certain cantina even casual fans should be intimately familiar with. It might be a little disappointing to fans who were hoping to visit a recreation of a world they've already seen on the screen, but considering that there are more movies on the way in the coming years, and the parks and movie studio are run by the same company, it's entirely possible that Batuu will feature in an upcoming film, meaning that Star Wars fans could actually be able to visit a movie location before the characters do. Just imagine how cool it would feel to see Rey show up on Batuu and be able to say, "Hey, I've been there!"

Disney Parks also describes the battle scene ride as being "built on a scale we've never done before," and says it will "make guests feel like they're inside a hangar bay" on a First Order Star Destroyer. If you've seen the movies, you know how enormous those ships are, so it sounds like that description is anything but hyperbole. The name of this attraction has not yet been released.

If you can't wait another year-plus to experience Star Wars live and in person, though, both Disney World and Disneyland already have several smaller attractions based on the franchise. At Disney's Hollywood Studios, fans can visit Star Wars Launch Bay, an exhibit featuring props and models from Star Wars: The Last Jedi, games, videos, and costumed characters. There's also a 20-minute interactive show called Jedi Training: Trials of the Temple where kids can learn to wield a lightsaber in the shadow of a full-sized AT-AT.

Disney also hosts regular Star Wars special events, and this year, Galactic Nights will take place on May 27. Guests are invited to come in costume to meet characters from the movies, participate in a park-wide scavenger hunt, and purchase exclusive merchandise and themed food options. The park's site also teases, "The event-exclusive projection show, Star Wars: Galactic Destinations, will debut a new, surprise planet," which sounds a lot like Batuu to me, but we'll find out soon enough.