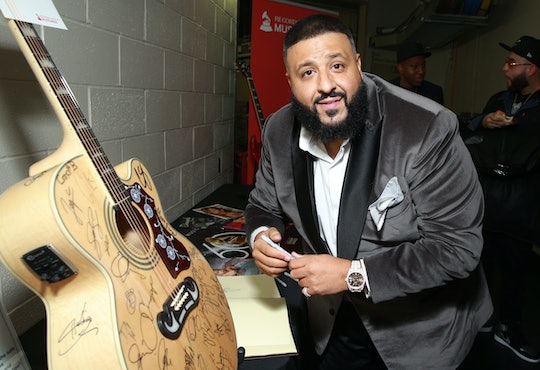 Sometimes it feels like DJ Khaled doesn't go anywhere without his son tagging along with him and this award season is no different. As was expected, DJ Khaled brought his son to the 2018 Grammys and they both looked dapper as ever. Khaled isn't nominated for any awards this year, but he is supposed to perform the hit song "Wild Thoughts" along with Rihanna and Bryson Tiller at some point in the night.

On the red carpet, Khaled walked with little Asahd, who celebrated his first birthday back in October, and he has a whole lot more hair than he did last year. Both father and son wore matching crushed velvet burgundy suits and bow ties, looking like true music royalty, though Asahd's black sneakers looked way more comfy than his dad's black dress shoes.

This is not the first time that baby Asahd has attended the iconic award ceremony. Last year, at just 3 months old, his dad brought him along for the ride, too. He told People last year that he loves being a dad and getting to share these tuxedo-worthy moments with his kid. According to People, Khaled said:

There’s nothing hard about [being a parent]. Every moment I get a chance to be with my son is such an amazing moment. This is something that you’re supposed to be grateful for and embrace. He’s just like me. He has great energy. He’s got the glow of a young mogul — the glow of a young icon. He’s amazing.

One day, if baby Asahd really does become a mogul, he can attribute it to literally growing up on the red carpet.

Because this is 2018 and DJ Khaled is just that kind of guy, baby Asahd already has his own verified Twitter and Instagram accounts. He posed (or some kind social media caretaker did, since I'm not sure he can hold up a smartphone on his own yet) that he was indeed heading to New York and tagged it "#grammys2018."

This is the first time in 14 years that the awards ceremony will be held in New York City at Madison Square Garden, so if he was on a plane to the East Coast with his dad and mom, Nicole Tuck, it's probably because he plans on walking on the red carpet again, as he should every year.

Check out some of the love Asahd is getting on Twitter

The baby must have been getting his beauty rest over the weekend though. Every year, Roc Nation and JAY-Z throw a huge brunch with some of hip hop's biggest names, and although Khaled attended, his mini-me was nowhere in sight. It's possible that Asahd and Tuck were just staying away from the cameras at the event though, or face-palming from afar as Khaled showed off his moves to the party attendees, as you can see in the clip below.

Khaled also attended, along with the rest of the music industry it seems, the Clive Davis and Recording Academy Pre-Grammy Gala on Saturday night. Again, though, little Asahd was not in his arms on the red carpet or in the many photos. That might be because of a "no kids allowed" rule or something, since the Carters didn't bring Blue Ivy or the twins to the pre-parties, and they were the hosts and honorees of both events. If Bey has to get a babysitter, so does everyone else, it seems.

Khaled obviously doesn't have to be nominated for an award to have a good time on Grammy weekend and it sure seems like it was a busy one. You can't blame a guy for wanting to share every single second of his successes with his family by bringing the little guy along every award season. Although his dad has the moves, baby Asahd definitely has enough swagger for the both of them on the red carpet. Let's hope he comes every year.