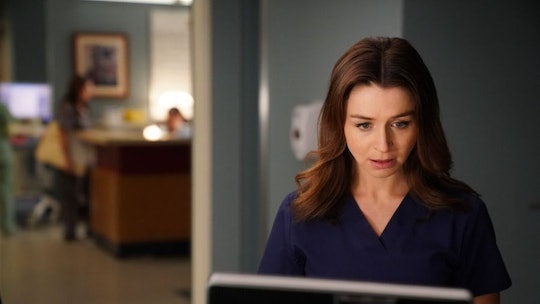 Amelia & Link Could Be The Perfect Unexpected Match On 'Grey's Anatomy'

As much as some fans may have wanted Amelia and Owen to make things work, it just wasn't in the cards for them. They tried to be together when she was Tumor Amelia, and then post-Tumor Amelia, and it still didn't work. But it may have been for the best because in the preview for tonight’s episode, it looks like she gets closer to Link, leading some fans to wonder if Amelia and Link hook up on Grey’s Anatomy.

It would certainly make all of the Owen drama and heartache worth it, in a way, for Amelia to find something a little less complicated with another doctor. Maybe it will get a little messy since they all work together and this is the same guy Meredith considered hooking up with, but this is Grey’s Anatomy. If two characters haven’t slept with or gone after the same person, they’re doing something wrong.

In the preview for tonight’s episode, it looks like Amelia and Link are staying at the same hotel and have a *moment* in the hallway where she seems to consider kissing him. At one point she calls him "chiseled," which I guess you could say is a line, and then says she should go to her room. But it does look like they might kiss or that their moment is leading up to something else, so it’s possible that Amelia and Link will hook up at some point. However I don’t think it will happen just yet.

This isn't the first time Amelia and Link have gotten a little closer. Earlier this season, he asked her out without knowing that she was with Owen at the time. And a couple of episodes ago, it was Link who comforted Amelia when Betty was in emergency surgery following her overdose. It wasn't the most romantic scene between the two of them, but it was the start of what could be a healthy romance for her. And we all know she needs it after dealing with the mess that is Owen Hunt for the past two seasons.

The only thing standing in their way is Meredith, even though I’m sure she’s too far gone with DeLuca to care about who gets her cast-offs. She did turn Link down, meaning she has stronger feelings for DeLuca, and they seem to be in an actual relationship right now. I don't think she would really care if Amelia and Link hooked up, but Amelia is way too empathetic to not overthink hooking up with Link a few hundred times before they actually do it.

Amelia does have an upcoming episode dedicated to her alone, so there could be more focus on her love life and, possibly, hooking up with Link, when that episode rolls around. In January, TVLine reported that Grey’s Anatomy Season 15 has been extended, partly so they could fit in a standalone Amelia-centric story.

"I’ve been doing the show for a long time and just hearing what it’s about fills me with nervous excitement," Caterina Scorsone, who plays Amelia, told TVLine. She revealed that it doesn't take place at Grey Sloan Memorial Hospital at all but that it does follow Amelia on an adventure of her own. "It’s definitely a little standalone," Scorsone added. "It’s almost like a little movie on its own."

It’s unclear when Amelia’s special episode will air, but if she and Link are gearing up for a romance or even just a casual hook up, it could happen soon. Given the timing and the fact that their flirting has only just begun, however, I don't see the two of them getting together just yet. There are still nine episodes left this season. That leaves plenty of time for Amelia to second guess the hook up, get on with it, and maybe even fall for Link. I might be getting ahead of myself here, but she definitely serves it.