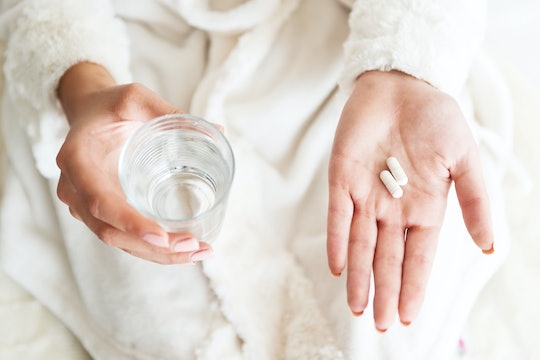 Here's How Antidepressants Impact Your Fertility, According To Experts

I'm a long-time user of antidepressants. I started my first round of prozac when I was around 15 years old, and I've been off and on them ever since. It's never easy to start taking medication, but mental health is just as important as physical health. However, that doesn't stop people from wondering how their antidepressants impact their body, like do antidepressants cause infertility? Naturally, I wanted to know because by the time I wanted to start trying to conceive (TTC), I'd been taking them for years.

When I started TTC, I was terrified of going off my Wellbutrin, but equally terrified of staying on my meds. Most antidepressants are contraindicated for pregnancy, according to the Mayo Clinic, and anyone who's gone off their meds knows that withdrawal isn't pretty. I knew I was up against possible night sweats, mood swings, weight gain or weight loss, and general emotional upheaval, but I wanted a baby. When I was TTC, the general consensus among OB-GYNs was to go off the meds before you even want to try to become pregnant. There wasn't a lot of data as to if it would affect your fertility, but it was simply a precautionary measure that was followed and recommended.

How antidepressants affect your fertility has garnered more research in the past five years, though. More studies have been completed looking at the effect of antidepressants not only on female, but male fertility. It's easy to get into the trap of taking on all of the responsibility to become pregnant, but the mom is only 50 percent of the fertility equation.

Given the gravity of the question, and how fraught it is, I decided to reach out to my own Reproductive Endocrinologist and kind of a hero in my circles. (Not going to lie, I've told everyone about him.) Dr. Jamie Grifo, MD, PhD from the NYU Fertility Center in New York City, New York tells Romper, quite simply, "Antidepressants have no known negative effects on fertility treatments and, when indicated, may actually be beneficial."

But there's a gray area. "The effects on a fetus are less clear and dependent on the type of antidepressant," Grifo continues. "When needed, the benefits outweigh the potential risk, but that needs to be discussed with the doctor and psychopharmocologist."

There's been even less study completed on the male aspect of the effects of antidepressants on fertility, in spite of how common the drugs are. However, one recent study published in the Journal of Canadian Family Physicians completed on rats showed a slight decrease in sperm count and quality in rats given SSRIs for a period of time before their sperm was evaluated. (As an aside, do not get curious and Google how they get the sperm from rats. Trust me. I'll never be the same.)

The MGH Center for Women's Mental Health wrote that they believe it's more likely that it's the lifestyle of women with depression, not the meds themselves, that contributes to decreased fertility in women who take antidepressants. Whether or not you continue taking your antidepressants is something you really need to have a conversation about with your OB-GYN and therapist to determine what's best for you moving forward. Hopefully, the science catches up as the number of people on antidepressants continues to increase, according to the Centers for Disease Control and Prevention. As for now, only you and your providers can determine what makes the most sense for you.