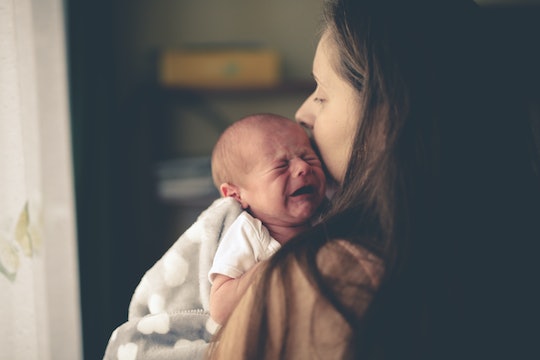 Here's Why Your Baby Might Seem Inconsolable During Those Growth Spurts

When my kids were tiny babes, they seemed to grow by leaps and bounds in the blink of an eye. It's nothing new, but those changes can manifest themselves in emotional ways, like when babies cry more during growth spurts. In a mere matter of months, my youngest went from this dainty little newborn who barely let out a whimper to a hefty chunk of a baby that seemed to wail and cry at the drop of a hat. The frequent crying, coupled with such rapid growth led me to wonder if a huge growth spurt was on the way.

Surely my son must have been experiencing a growth spurt at some point during those months when he felt like he basically doubled in size. He was about 3 months old at the time, which in addition to a few periods of rapid growth from 2 to 3 weeks, and 4 to 6 weeks, is one of the first times that babies experience a growth spurt, according to Kelly Mom. Kelly Mom also reported that this happens again around 4 months, 6 months, and 9 months of age as well. That just sounds exhausting, so I can only imagine how it makes a baby feel.

Dr. Jessica Nash, a pediatrician with Children's National Health System, tells Romper parents may notice some changes during these spurts of rapid development — which can unfortunately lead to a few tears from babies and parents. "We expect significant growth spurts in the first year of life when newborns are doubling their weight by the age of 6 months and tripling by 1 year," Nash says. "Also, there are other significant growth spurts in relation to development as they attain more motor skills like sitting up, crawling or walking, socially smiling, and interacting with parents and strangers. This is also demonstrated in the area of communication when they coo to babble to saying their first dada or mama."

Although Nash tells Romper that there is not a clear association between what may cause an increase in crying during growth spurts, she does say that an abnormal sleep pattern may be to blame for why people notice their baby crying more than usual. "What we do recognize during this time is changes in appetite like eating more, or changes in sleep patterns. Some babies may have been peaceful sleepers, but as they attain more skills, sometimes sleep is interrupted and they have either more night time awakenings or a need for more sleep," she says.

I mean, wouldn't you be cranky to the point of tears if you were having difficulty eating and sleeping? I know I would. Since babies communicate by crying, the increase in crying that you may experience during their growth spurt is basically just them communicating that something is out of whack and they do not understand it.

While you likely cannot stop your baby's increased crying completely, if you find that your baby is crying more than usual during a growth spurt, there are ways to help calm and soothe them. Nash tells Romper that "Simple measures like ensuring their child is getting enough sleep," and, "Looking for cues for signs of increasing comfort," can be helpful. "Also knowing that it is a short lived phase and these episodes usually mean growth or a new development is important," she adds.

When your baby is going through these periods of rapid development, it is important to understand that they can be tired or hungry, and will probably let you know by crying. However, Nash tells Romper that parents should seek professional medical help if they notice any of the following issues. "Parents should be concerned if the crying is inconsolable, their child seems uncomfortable or in pain, or any concerns about lethargy overwhelming sleepiness. Then I would be concerned about a medical issue, and they should seek medical care," Nash says.

More Like This
Baby Growth Spurts: When They Happen & What To Expect
Is It Good For Babies To Be Exposed To Germs? It’s Complicated
25 Winter Solstice Baby Names For Your Magical Little One
40 Lovely, Lively, Lavish Girls Names That Begin With “L”