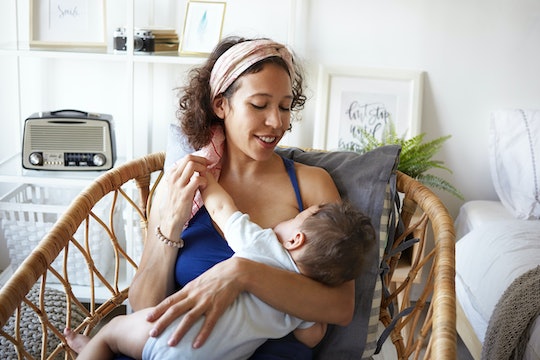 Here's How Much Your Breast Milk Actually Influences Your Babe

Creating breast milk is one of the most incredible things a woman's body can do. You can literally provide your child critical nourishment right from your breasts after birth. It's truly spectacular. But aside from nourishment, what are babies gaining from drinking breast milk? Do babies receive traits from breast milk?

When my babies were nursing, I never really questioned the details of the benefits they received from doing so. I knew that research has shown that breast milk provides ample health benefits, and that according to the World Health Organization (WHO), "Breastfeeding is one of the most effective ways to ensure child health and survival."

A 2015 study published in the medical journal Scientific Reports by a group of nine clinicians and researchers specializing in lactation reported that "very little is known about breast milk cells, variation in gene expression between mothers, and characteristics of the mother/infant dyad that may influence breast milk cell content." Basically, researchers can try to speculate about gene expression transferred through breast milk, but no hard and fast facts about the subject exist yet.

It is pretty commonly known that a baby's genetic makeup comes from a combination of the DNA from each of their parents. In fact, a report by Parents magazine stated that "Experts estimate that there are 60,000 to 100,000 genes (made up of DNA) in a human being's 46 chromosomes." These genes represent a myriad of traits that are expressed in the way a baby looks and acts.

Rachael Kish, Certified Lactation Consultant and co-founder of Imalac, tells Romper that "the genetic predisposition of a baby is determined at conception. After conception, nothing will alter the genetic makeup of the child."

While your baby may not receive their signature grin, eye color, or witty personality from breast milk, they are reaping some major benefits from the composition of your breast milk. "It’s a combination of protein, carbohydrates, fat, and vitamins. In addition, there are other things such as leukocytes (white blood cells) that are transmitted and can boost an infant's ability to fight infection," Kish says. And while staying healthy isn't a "trait" per se, it is an important factor in determining your child's ability to thrive long-term.

So what about bottle-fed babies? While fed is definitely best and moms who cannot or do not breastfeed should absolutely be supported 100 percent by everyone, the emotional benefits of breastfeeding for mom and baby are evidenced by researchers. In a 2018 study by University of Virginia psychologists Kathleen M. Krol and Tobias Grossmann, they examined the psychological and emotional benefits of breastfeeding for children and their mothers, finding that there is a connection between overall emotional well-being and the act of breastfeeding. "Heightened socio-affective responding seen in breastfed children is possibly connected to the stimulation of the oxytocin system and oxytocin’s known role in promoting positive affect and approach behaviors, while reducing stress and avoidance behavior," they wrote.

Regarding character trait differences in bottle-fed and breastfed babies, Kish says, "I am personally not aware of any scientific evidence that supports any character or behavior differences between breastfed and bottle-fed babies. However, there is an emotional bond that a breastfed baby receives from their mother that plays an important and significant role in the child's development."

From conception, genetic material from mom and dad determines the traits which babies are born with. Then a baby is either breastfed or not, and differences in nutritional and emotional benefits may exist between breastfed and bottle-fed babies, but at the end of the day, all of these babies grow up and will likely end up eating stale french fries off of the floor of a minivan at some point anyway.