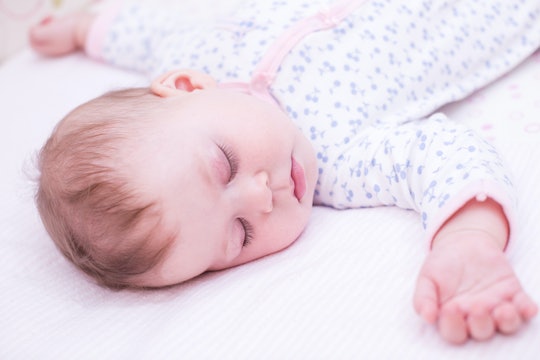 It's the classic new-mom paradox: We wait nine months for the first glimpse of our precious baby, marvel over their every move, rejoice when they eat and smile and wave their hands, yet we can't wait for them to go to sleep so we can get some chores done. Or finish a cup of coffee while it's still hot... or just flop on the couch and vegetate. But the bedtime routine of rocking them until they pass out can be exhausting, and not always effective. Do babies sleep better if they fall asleep on their own? Here's how to make sure both you and your baby are getting enough rest.

During those first few weeks, of course, you realize that you've signed up to be available for feeding and diapering around the clock, so that time passes by in a blur of semi-wakefulness. Clinical psychologist Janet K. Kennedy, PhD, founder of NYC Sleep Doctor, explains to Romper, "Newborns need help falling asleep, so it's fine to rock or feed them to sleep."

And despite what Grandma may have told you about raising babies who slept straight from dusk to 9 AM starting at two weeks, the truth is a little less idyllic. Developmentally, babies simply aren't ready to sleep through the night until they're about 3 to 4 months old and/or weigh 16 pounds, according to Zero to Three.

But once your baby is no longer a brand new infant, you can begin establishing a more workable sleep/wake schedule. As much as you adore your kids, you still need to be able to do some non-parenting things sometimes, too. Particularly at night, when you crave every moment of peace you can get.

The good news: It's actually better for older babies to fall asleep on their own. "As babies become more aware, they can start to fight sleep to be social — it's sort of like infant FOMO," says Kennedy, author of The Good Sleeper: The Essential Guide to Sleep for Your Baby (and You). So establishing a firm bedtime routine will make it easier for your baby to transition to dropping off. What's more, the techniques that help a newborn settle down actually have the opposite effect on an older infant. "After the first three months, all that rocking and bouncing can be agitating," explains Kennedy.

Naturally, there are going to be nights when your baby conks out en route to the nursery. But as a rule, getting baby into the crib while they're drowsy but not yet asleep allows them to get used to falling asleep on their own. Waiting until your child nods off in your arms will lead them to associate sleeping with being held, making it harder for them to settle down if they're not with you. "Further, it starts to become harder to transfer a sleeping baby into the crib," says Kennedy. "If they wake up when put down, it starts the whole process over and they don't get consolidated, deep sleep."

Babies under one year also sleep in 30- to 45-minute cycles, and it's normal for a baby to wake up several times during the night, according to the American Academy of Pediatrics. The definition of a good night's sleep at this age isn't an uninterrupted 10-hour stretch, but a night in which a baby can soothe itself back to sleep after waking during the lighter part of the sleep cycle. Following the sleepy-but-not-yet-out guideline for bedtime will help your child go back to snoozing during those brief wake-up periods.

So what else can help your baby drift off on their own at bedtime? A few recommendations:

Practicing habits that will help your baby fall asleep on their own will result in a better night's sleep for them and you.

More Like This
Is The Hatch Baby Sound Machine Worth It? This New Mom Says Yes.
Experts Explain Whether It’s Safe For Your Baby To Sleep On Your Chest
What Is RSV?
The Best Halloween Family Pajamas To Match Your Boos