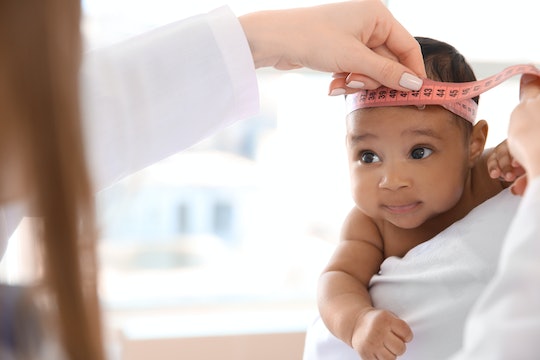 Here's What Percentiles *Really* Mean For Your Baby

From the moment your baby is born, the numbers assigned to them by doctors seem like an important and sometimes daunting figure. Immediately after birth, babies are weighed, measured, and given an Apgar score. All of these numbers help alert physicians to any pressing medical concerns. You baby will also be compared with others of the same age and assigned to a percentile based on the percentage of other children their age who share these numerical assignments. These numbers come at you hard and fast, which can be overwhelming but, do percentiles for babies really matter?

To understand whether or not these percentiles matter, knowing how a growth chart works is imperative.

"There are different types of growth charts that are in common use. The recommended growth chart for use in infants is one created by the World Health Organization (WHO). These growth charts were compiled based on data collected from children at a number of sites around the world and are meant to represent the normal range of growth in healthy children," Dr. Andrew Dauber, M.D., MMSc, chief of endocrinology at Children’s National Health System tells Romper. "An individual child's percentile tells a parent where their child would fall amongst the entire spectrum of children who are the same sex and age. For example, if the child is at the 10th percentile for length, this would indicate that out of the 100 children who are the same age and sex as that child, there would be 9 children who are shorter and 90 children who are taller."

Children come in all shapes and sizes, so just because a child does or does not fall into a certain percentile group does not necessarily mean there is any reason for concern. "The most important thing to remember about growth charts is that there is a wide range of normal for both length and weight. One must take into consideration whether an individual baby’s growth is appropriate for his or her family," Dr. Dauber explains. This is especially true during the baby years.

"In infancy, a baby's initial growth percentile is often influenced by the health of the pregnancy. After a child is born, their growth may shift either up or down in percentiles until the child hits the curve that is most appropriate for their own genetic potential," says Dr. Dauber.

So, for example, my youngest son has been in the 70th percentile range for both height and weight for his age since birth. He is growing on a steady curve and his pediatrician just assured me recently at his 5-year-old check up that his steady growth and family history of larger-statured men on his dad's side of the family is indicative of his overall good health. Had he suddenly fallen into a lower percentile at any point, we would have needed to investigate further to see if any medical issues had caused a problem.

"Parents should be concerned if their child is not gaining weight at all or is crossing multiple percentile lines," says Dr. Dauber.

"Again, an individual measurement should not be looked at in isolation, but should be considered in the context of the child's overall health and family background," says Dr. Dauber. "Finally, it is often very difficult to get accurate measurements, especially for length, for young children. Prior to starting an extensive medical evaluation, the first step is always to make sure that the measurements are in fact accurate."

Babies should have frequent check-ups to ensure that their growth is on track. The American Academy of Pediatrics recommends babies see their pediatrician for a well check within their first week of life and again at the 1, 2, 4, 6, 9, 12, 18, 24, and 30-month marks, and then yearly beginning at 3 years of age. This allows physicians to keep track of a baby's growth progressively and consistently, and their percentiles are typically documented at each visit.

"After the first few years of life, children generally settle into a stable growth curve and should not have significant changes in their growth percentile until around the time of puberty. Continued monitoring of the child's growth is very important as often subtle changes in the growth chart can be indicative of a brewing medical issue," Dr. Dauber says.