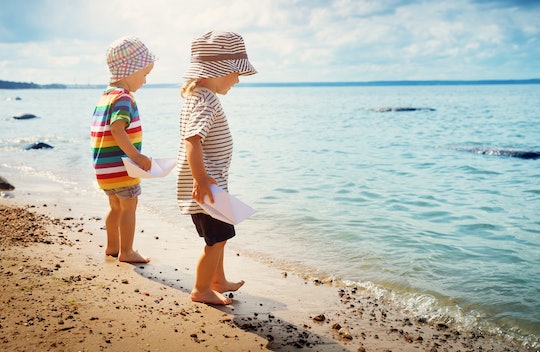 It's True: Boys Do Talk Later Than Girls, But There's A Lot Of Science To Explain Why

I’m sure everyone’s heard that saying about girls maturing faster than boys. As far as how true that is, I’m not sure, and the statement is obviously stereotypical and a little too close to the “Boys will be boys,” mentality, which is obviously problematic. But what about developmental factors, like speech and motor skills? Many of my friends kids’ are all over the map when it comes to the differences between milestones — especially between the different sexes — and that’s totally normal, because every kid is different. But what about speech? Do boys talk later than girls? If so, I have a lot of questions, like when do you know there’s an actual problem and not just a delay?

Mayra Mendez, Ph.D., LMFT, a licensed psychotherapist and program coordinator for intellectual and developmental disabilities and mental health services at Providence Saint John’s Child and Family Development Center in Santa Monica, California, says in an email interview with Romper, “It is a well-researched fact that boys outnumber girls when it comes to experiencing speech and language delays or being diagnosed with a speech deficit/impairment.” She suggests this could be because of the elevated levels of testosterone contributing to slower language development in boys. “Not all boys experience delays in speech and language development, however, and it is important to know that the delay may be temporary and mitigated with early intervention and speech therapy."

A Live Science article also reported that testosterone levels could be the cause of speech delays in boys, and referenced a study where “researchers found male infants with high levels of testosterone in the blood were two to three times more likely than girls to experience language delays. The opposite effect was found in female infants: High levels of testosterone in the blood were associated with a decreased risk of language delay.” The article also noted that the researchers felt like it could be “due to the differences in the way females and males process testosterone. It also may be that testosterone influences other areas of development, which in turn affect language development."

It's still important to note that oral development is different and all over the map for different kids. “But when children present with language delays or differences that extend beyond the ranges of typical expectations, then a developmental difference in the acquisition of speech and language skills may be identified,” according to Mendez. Normal development span is a range and “not precise to one exact age of acquisition of skill,” she adds. “There are a several factors that inform speech and language acquisition and skill level — one of which is hormonal influences that impact brain development in early childhood, particularly during the first three years of life.”

Language development in children apparently begins in utero, according to Mendez. Pretty nuts, right? It’s developing as the baby responds to sounds and sensations, she says. “Once a baby is born and for the first 3 months of life, language development focuses on reactions to light, sounds, tones, and use of vocal sound making to communicate needs, feelings, curiosity, pleasure, and dissatisfaction. Speech and language then proceed to develop with intonation and sound-making that imitates language." Then, once the child is 9 months old or so, they’ll start making babbling sounds and appear to start understanding gestures, and putting together “multiple sound combinations.”

So when will your baby say “mama” or “dada”? Mendez says you can expect that as early as 9 to 10 months of age, but every kid is different. “It would not be out of the range of typical development for some children to begin this process of sound making at 11 to 12 months. Variance within 2 to 4 months may still reflect within typical developmental range. This process of language development is generalized to both boys and girls. When it is said that boys may be slower, it is still relative to the natural occurrence of developmental variance.”

Another potential reason for slower development in boys’ language skills and girls’ language skills has to do with how they process language, according to a Northwestern University study that was reported in Science Daily. The researchers found that there is more sensory involved in processing language for boys, and girls are more abstract. Apparently the areas of the brain associated with language work harder in girls than in boys during language tasks, and boys and girls rely on different parts of the brain when performing these tasks.

How do you know when you have a speech delay issue? Mendez says it’s when your child has “difficulty producing sounds, speaks no words, or demonstrates difficulty putting sounds together. Speech delay may include speaking fewer than expected words for the child’s age or developmental level. It may also include articulation challenges, or phonological errors." Developmental conditions that are associated with speech delays include autism spectrum disorder, intellectual disabilities, medical conditions such as strokes, cerebral palsy, and epilepsy, and oral motor structural problems.

So don’t fret if your boy doesn’t seem to be developing his speech patterns or speaking as quickly as girls his age. It’s pretty common thanks to testosterone and the way boys and girls process language differently. If you notice it’s going on longer than just a delay, you may want to speak to your pediatrician and have them rule out any other reasons for the speech delay just in case.