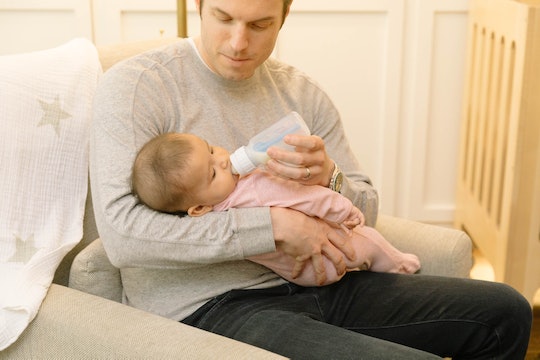 Here's How Custody Works For Un-Married Dads, According To The Law

Any parent who has been through a divorce can tell you that figuring out child custody can be a complex process. How a couple will share co-parenting responsibilities following a split isn't always straightforward, and a variety of factors can play a part in making that final decision. If the couple determining custody was never married to begin with, things can be even more confusing. So, do dads get custody if they aren't married to their kids' mom? The answer is, well, that it depends.

According to the National Conference of State Legislatures (NCSL), custody rights for unmarried dads vary considerably by state, with most states automatically awarding primary custody to moms, unless their kids' dads challenge that arrangement in court. There's also the matter of proving paternity. According to Legalmatch.com, dads generally have to prove that they are a child's father before getting any custody rights. Findlaw.com explains that some states give custody to moms when an unmarried couple splits, even if they put dad's name on the birth certificates. In other states, dads can establish paternity and pursue custody rights simply by signing a form.

Legalmatch.com warns, however, that unmarried dads are unlikely to win full custody over their child's mom, especially if she's been their primary caregiver, unless they can prove that she is an unfit parent. Generally, though, they can get some visitation and legal custody, if they choose to pursue it in court.

According to Legalmatch.com, establishing paternity and pursuing custody is pretty straightforward for dads — if they are married to their kids' other parent, that is. In most state their name will automatically go on their baby's birth certificate without any other effort. However, if you are unmarried, it can be a bit more complex. In fact, unmarried dads don't generally have custody rights after a split, unless they establish paternity and legally pursue custody or visitation.

As the NCSL explains, in some states simply putting the dad's name on your child's birth certificate is enough to establish paternity. However, in 14 states moms will get sole custody if a child is born to unmarried parents, even if their dad has signed a form acknowledging that he is their father.

So, getting custody as an unmarried dad may actually be more complex than getting custody after a divorce. This is because a divorcing couple has to ask the court to approve their custody agreement, but unmarried couples don't. So, according to Legalmatch.com, in many states moms will initially have primary custody unless or until their child's father challenges that status in court.

In fact, according to the same site an unmarried dad may not have any legal rights to custody until he goes through the aforementioned process, which might be expensive and will have to prove that he is a good parent. Also, the site warns the process probably won't result in him getting full custody of his kids.

According to LegalZoom.com, once paternity is established courts might consider a variety of factor, when determining custody, including the age of the child and even whether or not they are breastfed. Courts are supposed to consider what’s in the best interest of the child, especially when deciding how to arrange custody and visitation. So they should theoretically factor in things like if one parent was the primary caregiver for a child, or how much a new custody or visitation agreement will disrupt a child's life, rather than assuming that a mother should get full custody.

While according to Pew Charity Trust, fathers' rights groups are pushing for state laws that remove barriers to dads getting custody, their biggest barrier might actually be themselves. As the site reports, one study in Massachusetts found that dads who pursue custody get at least some legal or physical custody 70 percent of the time.