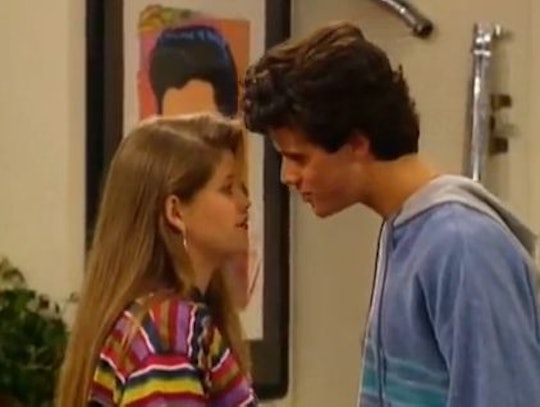 Do D.J. & Steve End Up Together In 'Fuller House'? There Are Definitely Signs

If you're watching Fuller House, the new Netflix sequel series to Full House, you no doubt noticed some very big hints in episode 1 that D. J. and Steve might once again be a thing. So, do D.J. & Steve end up together on Fuller House? As Entertainment Weekly noted, Candace Cameron Bure, who plays D.J., certainly hinted in that direction. But before anyone attempts to answer that question, it's worth reviewing what we know about Deej and Steve's relationship up to this point.

Steve Hale, played by Scott Weinger (who also voiced Aladdin in Disney's 1992 animated film Aladdin — yup, STEVE WAS ALADDIN, THE ALADDIN), first appeared on Full House in Season 5. He and D.J. officially became an item in Season 6, after which he became a regular on the show, often shown raiding the Tanners' fridge. He and D.J. dated until the end of Season 7, when they broke up because the passion had gone out of their relationship. Steve was back, though, for the series finale, when he surprised D.J. on the night of her senior prom, and the door seemed open for them to get back together.

Clearly that didn't happen immediately. We find out in episode one of Fuller House that they both married other people. Steve is divorced, and D.J. is recently widowed from her husband, Tommy Fuller, who died in the line of duty. But right off the bat, Steve seems like he's trying to pick up where they left off. Almost as soon as he walks in the door for Danny, Joey, Jessie, and Becky's going away party, he says, "Listen, Deej, I know you're not ready to start something new, or, uh, restart something old, but I want you to know that when you're ready, I'm gonna be right here."

Then, after the party, while raiding D.J.'s fridge once again, he says, "You know, it's funny. I always thought you and me would wind up together" and adds that he should have just asked D.J. to marry him at the prom. D.J. gently reminds him that that probably wouldn't have been the best course of action. All of which is clearly engineered to raise the question, do these two crazy kids end up together in the end?

I don't have a crystal ball, and the writers themselves may not know yet, but their chances seem good for a few reasons. First of all, as Steve notes, both he and D.J. are single. Secondly, they have a long and mostly positive history together. Thirdly, they're still in each other's lives. Steve lives close enough that when his dog, a descendant of Comet (RIP), is in labor but the puppies aren't coming, he brings her over for help from D.J., who is now a vet. That kind of proximity means lots of opportunity for the chemistry between them to draw them back together. And fourth, fans have waited a long time to see D.J. and Steve together, foreverrrrrr...

On the other hand, Bure told EW that Steve "makes a few appearances" on the show. "A few" does not sound like enough to seal the deal. Maybe Bure was just playing it cool? Hard to say. My money is on the Fuller House writers giving the people what they want.