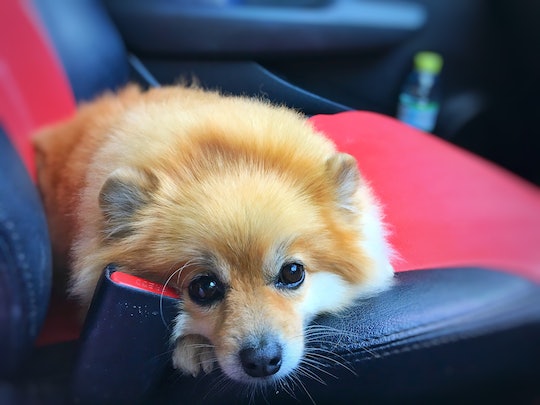 Apparently Dogs *Can* Get Car Sick, But There Are Ways To Help Your Queasy Pup

Are you hitting the road with your dog this summer? Before you head out on the highway, it’s important to make sure your dog is comfortable for the trip, which begs the question — can dogs get car sick? It turns out that they can, but thankfully, there are a number of preventive measures you can take to keep them feeling good on the drive.

Dr. Wendy Mandese, DVM, clinical assistant professor of primary care and dentistry at the University of Florida College of Veterinary Medicine, told Romper that when it comes to car sickness, some dogs experience it for exactly the same reason some people do.

“The symptoms of motion sickness appear when the central nervous system receives conflicting messages from the sensory systems, most commonly the inner ear and eyes,” she explains. “When moving in a vehicle with eyes closed, looking down, or at the inside of a carrier, the inner ear knows that you are moving, but the eyes are looking at a solid surface that isn’t moving. This conflicting information to the brain is what is thought to cause nausea.”

You can’t see your pup turning green when they’re about to toss their biscuits, but other symptoms of car sickness in dogs are similar to human symptoms, as the American Kennel Club (AKC) reported, and they’re easy to spot.

“We know dogs become nauseous with car sickness because they will often vomit during or right after a ride. They also often hypersalivate, which is a sign of nausea. I don’t think dizziness is very common, or possibly mild dizziness occurs and it just isn’t detected because it’s not severe enough to cause stumbling,” says Mandese.

“It is more common in puppies, just as it is more common in children,” Mandese says. “One possible reason is that the central nervous system isn’t fully developed and more likely to be ‘fooled’ by the conflicting sensory input. Many puppies outgrow car sickness, but some do not. If your adult dog becomes nauseous every time he or she takes a car ride, it may be a permanent problem. But the good news is that medications help a lot.”

Pet parents whose fur babies only experience mild or occasional car sickness may just need to pick them up some over-the-counter motion sickness medication to get relief. Dogs with more severe, recurring motion sickness may need a prescription. Either way, it should help Fido immensely.

“You can use over-the-counter Dramamine in dogs; call your veterinarian to get the dose based on your dog’s weight. For severely affected dogs, a prescription anti-nausea medication called Cerenia can be helpful,” Mandese says.

There are also some changes you can make to help your dog without medication. For example, taking them out of a crate so they can see during their car trip keeps that brain miscommunication from happening in the first place.

“Just as in humans, allowing the dog to look out the window may help with motion sickness,” Mandese explains. “If the eyes can see the same movement that the inner ear is experiencing, there is less likely to be a conflicting signal to the brain. The medications help, but just as any time when your dog isn’t feeling well, lots of hugs and comfort are required.”

So, with a little preparation and plenty of love, you and your dog can set off on the most epic road trip ever, and leave car sickness in the dust.