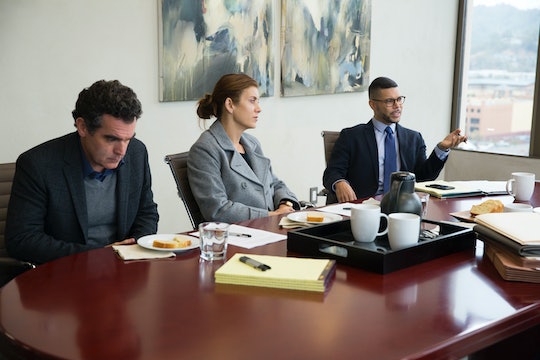 A central plot point in Netflix's latest series 13 Reasons Why was Hannah Baker's parents filing a lawsuit against the school for allowing their daughter to be bullied and doing nothing to stop it. After Hannah committed suicide, they decided to take action in order to a.) get justice for Hannah and b.) make sure nothing like this ever happens again. So do Hannah's parents win the lawsuit on 13 Reasons Why? Warning: Season 1 spoilers ahead!

The first season ended with the lawsuit still going on — a plot development that never happened in the book, mind you. Hannah's classmates were just starting to be deposed and Tony gave Hannah's parents the audio files of her tapes on a USB, so that they could understand everything that happened to their daughter. During Tyler's deposition he also made mention of the tapes, revealing that they help to explain why Hannah chose to end her life. And by the end of the episode, her parents began listening to the files.

It's unclear what they'll do with the files, but most likely, they'll put it in as evidence for the case. Besides the fact that it demonstrates all the terrible things Hannah witnessed and the torment she endured, it also includes recordings of her last conversation with Mr. Porter. Not only is that evidence that the school was aware of how bad things had gotten for Hannah, but if they find Mr. Porter's planner where he ripped out the page in his calendar with his appointment with Hannah, it'll also prove he destroyed evidence.

The tapes also include Bryce's confession to raping Hannah, which Clay obtained without his knowledge. And while the school can't be held responsible for that, it only reiterates how poorly Mr. Porter handled the situation after she told him about the rape. With the tapes, the lawsuit becomes a slam dunk victory for Hannah's parents so it's really just a matter of whether or not they submit them into evidence, and honestly why wouldn't they?

Hopefully there will be a second season of the show that really ties up this story so fans can know for sure if Hannah's parents and Hannah herself received the justice she deserved. However, at this moment the show has yet to be renewed for a second installment and it's unclear if it will be. Still, the way the first season ended definitely seems to point to there being more to come. Besides the lawsuit, there were a lot of plotlines that were left open ended. Does Alex die after he shot himself in the head? Is Tyler planning a school shooting?

There's a lot of questions that still need to be answered and a second season could definitely tie up all these loose ends. Fans will just have to wait and see if there's more to this story or if this is really the end.