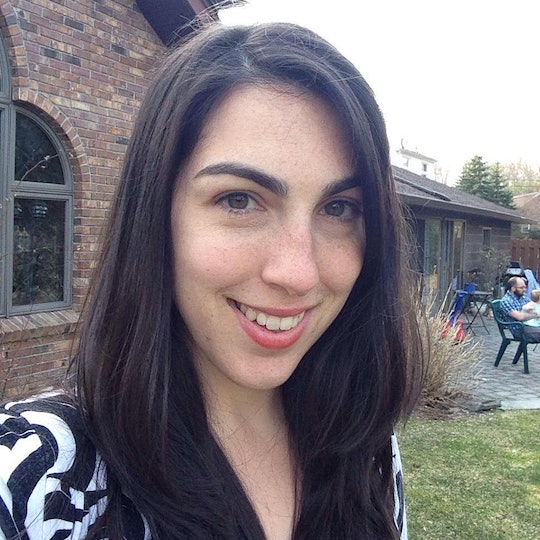 Do I Owe It To My Kids To Come Out As Bi — Even Though I'm Married To Their Dad?

I see families that look like mine everywhere. Mom, dad, and two beautiful blonde children. We're all white and able-bodied. Dad goes to work and mom has a job that allows her to stay home with the kids. Despite our "traditional" appearance, we espouse uncompromising leftist, progressive values — a living wage, universal healthcare, abortion access, and equality for the LGBTQ community, to name a few. Most looking at us would consider us LGBTQ allies, but most people looking at us would consider me straight. I'm not. I'm bisexual. So, what's that mean for my family?

If you'd asked me any time before my late 20s, I would have told you I was straight, because it never really struck me I could be anything else. Of course I'd known since childhood that queer folks existed. And, guys, come on: I came of age during the height of Will and Grace! Obviously I wasn't completely in the dark. But, like Will and Grace, my overall view of queerness was incomplete and problematic.

I've known, from the time I was little, that I liked boys... a lot. I was the kid that had to be told that kissing on the bus ride home from kindergarten is inappropriate.

At the same time, I also found girls just as appealing, though I didn't say so out loud. Even though I knew that I wanted to kiss other girls in my class (because, apparently the bus is an inappropriate place for grade school smooching), I also "knew" that girls kissed boys, not other girls. No one had to tell me about this "rule," just like no one had to tell me that breaking it would be taboo. I just knew.

When I got a little bit older, and I was introduced to the words "gay" and "lesbian." The world of human attraction was now conveniently broken down into two clear-cut choices: you were straight or you were gay. Gender was a binary and so was sexual and romantic attraction. At this point I'd spent so much time convincing myself that what I was didn't exist (it's not like I saw any bisexual representation in the media or in my life) that I unquestioningly "knew" I was straight.

It seems laughable to me now that I don't remember knowing or even hearing the word "bisexual" until I was 13. It was on an episode of Friends. In fact, the following scene was my official introduction:

At this point in my life, this is what society had been telling me, a bisexual girl, about bisexuality:

1996 to 2001: It "exists," but not really, because the people who claim to be bisexual are lying to themselves about it. It's embarrassing, just like you always suspected, which is why it's OK to make fun of people for it.

I didn't realize until recently how much my perception of my own sexual identity has been influenced by this phenomenon, nor how much of it I'd internalized.

I'd internalized this messaging (along with a heaving helping of general misogyny and male gaze) so much that I'd nod in agreement. "Sex with women? Sure. But I couldn't, like, date a woman."

In 2004, I began dating the man who, three years later, would become my husband. My embarrassing, not real, unimportant attraction to women, I figured, would now be completely moot. I'd picked my person, hadn't I?

Two things finally prompted me to come around to the idea that my bisexuality was real and it mattered. The first with the birth of my son when I was 28. Motherhood didn't change me in any profound, fundamental way, but it did inspire me to be the most authentic version of myself I could be. The second was helping a friend figure out if/how/when he was going to come out to his family a few months later. "I think part of your hesitance comes from this idea you have that being gay means you have to be a certain way," I observed during a particularly emotional conversation. "And you really don't. You are who you are, and that doesn't change. You don't all of a sudden have to be a gay stereotype the minute you come out. No one is waiting in the wings to hand you a pink boa or anything like that."

I thought about what I'd said about a week later, and I realized how hypocritical I'd been. Because despite a lifelong attraction to members of the same sex and "enjoyable dalliances" with members of the same sex, to say nothing of a continued sense that there was more to my sexuality and sexual identity than I presented or that showed up on paper, I refused to ever call myself "bisexual" because of the many misconceptions I had about what it meant to be bisexual.

Motherhood didn't change me in any profound, fundamental way, but it did inspire me to be the most authentic version of myself I could be.

"Bisexual erasure or bisexual invisibility" is, according to GLAAD, "a pervasive problem in which the existence or legitimacy of bisexuality, either in general or in regard to an individual, is questioned or denied outright." I didn't realize until recently how much my perception of my own sexual identity has been influenced by this phenomenon, nor how much of it I'd internalized. In fact, I still do, to some degree.

I identify as bisexual now, but I'm still coming to terms with it in many ways. When I'm alone, with my brain, I get it. Who I am and how I feel make sense. But in the context of my family, my community, and society at large, I'm still emotionally and ethically confused about what my bisexuality "means" and what I should do with it.

As I said, most people assume I'm straight, and I can't blame them for their confusion. After all, I'm a monogamous, cisgender woman married to a cisgender man, and I've never been in a same-sex relationship. And it's not like I have a huge tattoo across my chest that says "Bi Life." (Note to self: maybe get huge tattoo across chest that says "Bi Life.") While being labeled straight makes me feel misunderstood and unseen, I can't deny that it imbues me and my family with enormous amounts of privilege that, say, a bisexual woman in a same-sex relationship would not enjoy.

But in the context of my family, my community, and society at large, I'm still emotionally and ethically confused about what my bisexuality "means" and what I should do with it.

So then I ask myself if I'm "allowed" to assert my bisexuality. When the subject comes up I have made an effort in recent years to say: "Yes, this is me." But claiming queerness at this point in my life — when it's so safe for me to do so, when my life with my family is indistinguishable from the lives of straight allies (and, in many ways, oppressors) — somehow feels potentially disrespectful to LGBTQ families. Those families, I think, live with the stigmas and struggles mine has never really had to face because it took forever for me to be open to the truth. I think "My family is OK. I should spend less time worrying about asserting my identity and more time making things better for others. My baggage can wait."

And what about the issue of if/how/when to reveal my bisexuality to my kids? Will coming out to them make them worried about my commitment to their father? Are they going to be all "TMI, mom"? Lately I've determined to tell them when an opportune moment presents itself, because I didn't want to contribute to a narrative of non-existence by allowing my kids to believe that bisexual people aren't real. Besides, what if they're bisexual, too? I'd never want them to second guess and dismiss themselves as I'd done. But am I a good enough role model for them? A bi role model who... looks pretty straight?

I honestly can't tell if all of this is simply more internalized bisexual erasure and self-loathing or if it's a fair acknowledgement of my privilege and limitations. It all runs pretty deep.

Being bisexual, I can finally admit, is an important aspect of my identity.

I imagine there's a contingent of people reading this who are saying, "Oh just be out and proud and stop overthinking this!" and, perhaps, another saying, "Oh just keep it to yourself, this isn't a big deal!" But, one way or another, this is a big deal to me.

Being bisexual, I can finally admit, is an important aspect of my identity. So is being a mother. "Bisexual" and "mother" are in and of themselves loaded terms and roles. Both have tremendous, unfair, sexist, and deeply problematic assumptions heaped onto them. Put together and there are times that it can be existentially crushing.

Slowly, I'm figuring out to get out from under the weight all. The process is sometimes painful and more often than not painful to admit it's painful, because I feel guilty that, in my privilege, I feel any kind of struggle at all. But the struggle, as the kids are saying, is real.