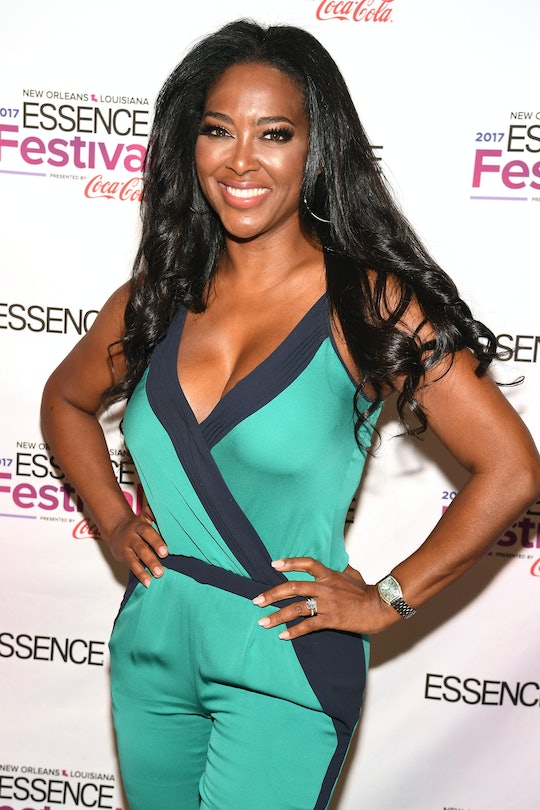 'RHOA' Star Kenya Moore Is Ready To Be A Mother

Kenya Moore returned to Real Housewives of Atlanta Season 10 with huge news to surprise her castmates: she had eloped earlier that summer with her boyfriend of about seven months in a private wedding ceremony on the beach in St. Lucia. Not even her father was in attendance, but a few of the Housewives felt put out anyway. Luckily, the pair plans to have a bigger wedding in June, but do Kenya Moore and her husband want kids at any point in the future? We've seen how seriously Kenya takes fertility planning in previous seasons, and luckily, Marc seems to be on the same page.

"We both want to start a family and soon — like, right away," Kenya recently told People, which exclusively profiled her wedding. "We both want a child." Back in Season 6, we saw Kenya broach the subject of seeing a fertility specialist with her family and it didn't go over well. She was 42 years old at the time and pursuing IVF alone, which her family didn't approve of. From the lack of a "potential baby daddy" to Kenya's busy lifestyle, her friends and family didn't think she was ready to be a mom. But now that she's 46 and married, Kenya is once again looking into her fertility options.

She was spotted about three weeks ago in the Carribean, entering the world-renowned Barbados Fertility Centre. According to TMZ, sources close to Kenya said that she was indeed there undergoing IVF. Marc was supposed to catch up with her later in the week, and then the coupled planned to spend about two weeks in Barbados while Kenya underwent fertility treatments. She didn't have any Bravo cameras in tow, but the RHOA star is reportedly saving the experience to address on the reunion show — presumably along with a pregnancy announcement — when it tapes early next year. She teased in a video for BravoTV.com that we may indeed hear news of a "little twirl" to come this season (which is admittedly an adorable hashtag for future baby photos).

It looks like Kenya and Marc have bounced back from their rocky patch at the beginning of this season. The pair first met in the summer of 2016 when they were introduced by mutual friend (and fellow Bravolebrity) Roblé Ali. They didn't start dating until December and were married by June, which meant that their courtship never really had to undergo typical media scrutiny, since they managed to keep their entire relationship off-camera between seasons. So once filming started back up again, the adjustment seemed to overwhelm the couple.

Kenya, with a series of flopped relationships throughout her tenure on the show, has always been plagued by rumors of attempting to "hire" a boyfriend portrayed by an actor to spice up her storyline. So when she eloped between seasons after an admittedly short courtship, rumors that her marriage was faked for the cameras swirled. She and Kim Zolciak almost got into a fist fight over it when Kim made a return appearance at NeNe's (horrifically themed) Girls and Gays Never Forget White Party.

And that argument was nothing compared to Atlanta's ruthless local blog scene fueling media speculation that their relationship wasn't real. In one heartbreaking scene, we see Kenya get off the phone with Marc and break down crying to a producer, saying:

This is really just f*cking with him. He can’t even sleep, he’s not eating. He’s got ex-girlfriends sending him things about me from 25 years ago [about] some famous guy I dated. Like, what does it have to do with now? They don’t know me and everybody said he fought his mother and everybody for me. This pressure is too much. It’s too much stuff going on. I don’t wanna get divorced.

But it seems like the couple is on more solid footing now and happily trying to grow their family. Stay tuned to see if Kenya's little twirls stick.