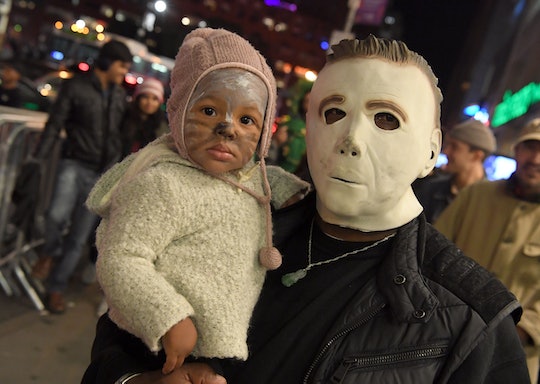 Do Kids Have More Nightmares After Halloween?

Halloween is the holiday to celebrate all things goulish and scary, but at what expense? Some children are more affected by the holiday than others, causing many parents to wonder: Do kids have more nightmares after Halloween? Whether your family goes all-out-scare-fest for Oct 31, or you prefer to keep it low key, some kids will be more affected than others, so how is a parent to know what will cause their kid to have bad dreams at night and what won't? The line isn't an easy one to draw.

According to child psychiatrist Dr. Benjamin Chan in an interview with The Scope from the University of Utah's Health Sciences Radio, each child is affected differently by scary movies and other Halloween-time events. While some kids are prone to nightmares, others rarely experience them and love a good scare. "All children are afraid of the unknown," Chan noted, "be it afraid of going to a new store, a disruption in the routine, things like that." Seeing scary movies or things that are meant to frighten can, he remarked, multiply a child's fright significantly, resulting in the mental imagery definitely causing nightmares.

Kids Health notes that even though by about pre-school age, most kids are able to understand that nightmares can't really hurt them, it doesn't make them any less scary, especially during Halloween when everyone is infatuated with dressing up, altering reality, and haunting. But even if they can understand what is real and what's not, that doesn't keep them from being scared. If adults are freaked out by horror films, we can only imagine the trauma that a small child could possibly endure.

To complicate matters further, Common Sense Media pointed out that although some kids may be scared by spooky imagery in a scary movie (even one meant for kids), other kids' nightmares are brought on by fears of a different kind. Things like fearing the loss of a loved one, abrupt changes, trying new things, or even loud noises can bring on bad dreams and mild paranoia in children.

So what is a parent to do? Should you rule out all scary movies, haunted houses, and freaky decorations during the Halloween season in an effort to shield your child from potential bad dreams?

The aforementioned Kids Health article noted that avoiding scary movies, scary talks, or other Halloween-centric themes immediately before bed can lessen the likelihood of your child experiencing a nightmare. Similarly, sticking to your usual bedtime schedule and ensuring that their room is a scare-free, welcoming, and relaxing environment all year round will help them wind down and sleep soundly when the time comes.

In concurrence with what most moms already know, Pop Sugar pointed out that each scary movie, haunted house, and even scary story or decoration should be weighed on a case by case basis. Parents know their children better than anyone and although movies have age-ratings for a reason, most parents are able to decide what will and will not cause their kid to have a nightmare, even during the scariest season of the year.

If your child does have a nightmare this Halloween, Caroline Presno (mom of a 5 year old, and a former psychotherapist) shares a few simple, non-obvious ways that you can handle it without worsening the issue on Huff Post. For example, saying "it's only a dream" is usually a less empathetic response that you child may be needing. Instead, recognize how your child feels and comfort them accordingly.

Presno also notes that parents should encourage their kids to talk about their nightmares, not hold them inside, regardless of whether it happens during Halloween or not. "The same way you would treat a physical wound so that it heals," the piece suggested, "you need to address the psychological turmoil that nightmares cause by communicating with your child".

If you're worried about your child experiencing nightmares this Halloween, stick to fun-themed Halloween decorations, movies, events, and costumes and wait until they're older (if at all) to introduce the scarier aspects of the holiday.