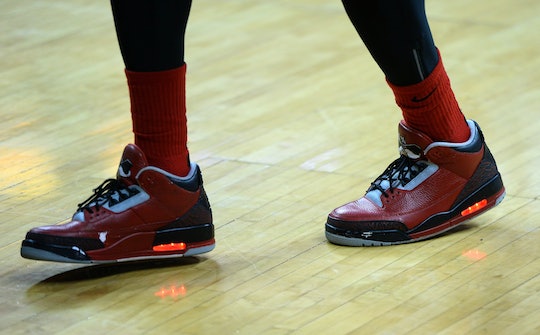 Do Kids' Light-Up Shoes Have Batteries & Can They Be Dangerous?

The news this week that a fire in the SUV of one Texas family might have started because of their toddler’s sneakers has caused some parents to take a closer look at their little ones’ footwear. Light-up shoes are pretty popular among the preschool set; the tiny flashing lights turn on and off as the wearer runs, jumps, and skips around, making them the ultimate in day care cool. But do the shoes actually pose a fire hazard? With this latest report, parents are starting to question whether preschoolers’ light-up shoes have batteries that cause fires.

The news isn’t exactly encouraging. The Houston-area couple whose SUV caught fire, Atilla and Jovan Virag, told local news station KHOU that they called the fire department after noticing smoke coming from their vehicle. After fire officials arrived, they were able to determine a possible source of the flames: a pair of Jake and the Neverland Pirates light-up shoes purchased that week at Payless for the family’s toddler son. According to KHOU, Jovan Virag took one of the shoes apart and discovered that it was powered by a tiny lithium battery — the kind that have been known for shorting out and causing small fires in hoverboards and other small electronics. Fire officials did not deem the shoes the official cause of the fire and are still investigating the incident. Payless did not wish to issue a comment to Romper about the event.

Earlier this year, the US Consumer Product Safety Commission said the self-propelling, self-balancing scooters posed “an unreasonable risk of fire,” according to a report on CNET.com. Citing reports of at least 52 hoverboards causing some $2 million in damage over the holiday season, the agency said the toys failed to meet safety standards and put consumers at risk of burn injuries and even death.

Among the government’s concerns, according to a separate CNET story, was that the hoverboards were powered by lithium ion batteries, which showed an alarming — and unpredictable — tendency to catch fire.

Earlier this year, the Federal Aviation Administration concluded that lithium batteries were too dangerous for airplanes and published new safety warnings to airlines saying that lithium-powered devices could increase “risk of a catastrophic hull loss,” according to ABC News.

That’s why it’s so puzzling that major kids’ shoe manufacturers would rely on lithium-ion batteries for their light-up footwear. A New York Times story from when the shoes were first introduced on the market in the late '90s confirmed that shoe companies used lithium batteries to make them light up, adding that the expectation was that a child would outgrow the shoe before the long-running battery would need to be examined or replaced. There’s little information available online about whether the practice is still the norm, although the Virag’s discovery suggests that it could well be the case.

Whether the Virag’s car fire can be blamed on their son’s footwear is still under investigation. What’s more, the CPSC hasn’t issued any warnings or guidelines involving light-up shoes. So, where does that leave parents? For now, concerned parents and caregivers across the country will have to make their own judgments about whether the Virag’s experience is enough to cause any serious concern. If so, throwing the popular shoes in the garbage might be the only thing for parents to do at this point.