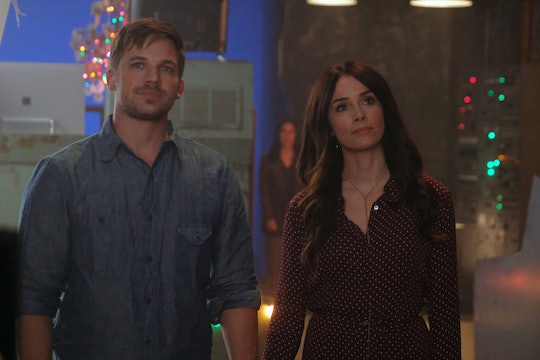 From the very first episode of Timeless, fans could feel the chemistry between Lucy and Wyatt. The two played a will-they-or-won’t they game until Season 2, and then finally shared a few tender moments. But when Wyatt’s wife came back into the picture, their love story was sidetracked. Now that the series is coming to a close, fans are anxious to know, do Lucy and Wyatt get together in the Timeless movie?

Warning: Spoilers for the Timeless finale movie ahead.

Timeless fans, also known as Clockblockers, have been shipping for Lucy and Wyatt since Season 1 of Timeless. The two shared a few pretend kisses here and there, but when they finally got together on their mission to 1941 Hollywood in Episode 3 of Season 2, fans were sure the two would become a couple. They had a few bumps along the road, but luckily, in the Timeless movie finale, Lucy and Wyatt find their way back to each other, and fans are finally getting the epic love story they’ve been rooting for.

When viewers last saw Lucy and Wyatt at the end of Season 2, their relationship was getting awkward. Rittenhouse went back in time to bring Wyatt’s wife, Jessica, back from the dead, and her arrival threw Wyatt for a loop. He had been pining for his dead wife for years, and when he saw her alive, he felt like he was obligated to be with her. The decision to choose Jessica over Lucy wasn’t easy for Wyatt, and Lucy was completely heartbroken. And a few weeks later, when Jessica announced she was pregnant with Wyatt’s baby, it seemed as if the two would never get a chance at love again.

But what Wyatt and the rest of the time-traveling team didn’t know was that Jessica was now working with Rittenhouse, and her pregnancy was a total sham. In the last episode of Season 2, the team realized that Jessica was an enemy agent, and Wyatt realized how blinded he was by his love for her. In the finale movie, when Wyatt, Lucy, Jia, and Flynn travel back in time to find a sleeper Rittenhouse agent, Wyatt tells them that since Jessica was the cause for Rufus’ death, she would have to die to bring him back to life. So, Flynn sneaks onto the lifeboat and sacrifices his own life to go back in time to kill Jessica. Her death brings Rufus back, and Wyatt is finally able to move on.

The team later travels to 1950s North Korea, and they find themselves trapped in a deadly situation. With danger and death looming, Lucy tells Wyatt that she loves him and that she doesn’t care about what happened in the past. “I love you Wyatt Logan, I’ve loved you since the Alamo, since you kissed me with Bonnie and Clyde, since that night in Hollywood,” she tells him. He tells her that he regrets choosing Jessica, but she insists that it’s in the past, and they should focus on the present. The two share an epic kiss before they are saved by Agent Christopher and head back to the future.

After moving past the Jessica issue, Lucy and Wyatt are finally able to be happy together. The finale ends with a flash-forward scene in which fans can see that the pair is still deeply in love and are now parents to twin daughters, Amy and Flynn. As a fan of Timeless who has been shipping this relationship since Season 1, I felt like the ending was a perfect way to leave their love story.

The finale may mean that the series is finished for now, but loyal fans are still pushing for another season of Timeless. You never know, with the current fight Clockblockers are putting up, you might see more of Lucy and Wyatt’s romance in the future.