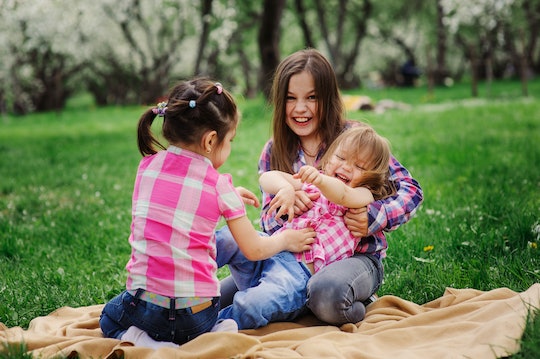 The Truth About Middle Children Problems

As an only child, I was fascinated by The Brady Bunch. Having that many brothers and sisters? Intense. And poor Jan Brady. It was always about "Marcia, Marcia, Marcia" and, as the middle child, she always seemed to be left out or looked over. Even in the ‘90s remake, The Brady Bunch Movie, there was a lot of focus on Jan, even though she was an adult, being looked over because she was the middle child. But is there truth to this ongoing joke? Do middle children really have more issues? Even though I was fascinated and thought it would be neat to have a lot of siblings, I definitely didn’t want to be the middle child like Jan.

According to Maureen Healy, an expert on sensitive children and author of Growing Happy Kids, "There is no indisputable evidence that ‘middle child syndrome’ exists."

Though middle children may not necessarily have "more issues," there is a higher probability for them to get overlooked or compared. "Middle children are often overlooked because parents have to consider the youngest children when planning an event — for example, can Amy at age 4 hike this mountain? — or how to engage both the youngest (Amy age 4) and oldest (Vivian age 11)," Healy tells Romper in an interview. "The middle child (Jett at age 8), is along for the ride."

"From my practice, I tend to work the most with first-born children, because they're fearless and get into conflict at school or home," Healy says. "Looking through my notes, I find it more rare that a middle-born child is brought to me."

In an interview for Psychology Today, Katrin Schumann, co-author of The Secret Powers of Middle Children, said “Middles are not embittered wallflowers — they are social beings and great team players … if middles are so resentful and bitter, why are they more cooperative and trusting in their friendships?"

She went on to say that many middle children are successful leaders and that "52 percent of our presidents have been middles." She included examples of other influential people, including Martin Luther King Jr., and noted that "all are visionary middles with strong leadership qualities."

Why is that? Healy says some middle children are extremely well-adjusted and forge their own paths and interests because they develop the courage to explore and find something they’re uniquely good at. (Something to stand out from their siblings, perhaps?)

Schumann also noted in the Psychology Today interview that middle children are great negotiators and are used to not getting their own way. "Middles have lower self-esteem than other birth orders because of their lack of uniqueness and attention at home — but this can actually be a positive as they don’t have huge egos." This makes them flexible, critical thinkers and independent while still being social, Schumann said.

For those middle children who do have issues, Healy says if they haven’t found a creative outlet, they’ll let their emotions and energy out in unhelpful ways, including bullying their siblings to get attention and being overly competitive with their siblings. "It's critical they find something that makes them happy, and uses their unique skills so they can find their own path," Healy says.

Ways for families to avoid "looking over" the middle child include having a day for each child to choose what they want to do for a weekend activity or playtime, and everyone must go along with it for that particular kid’s turn. "Whether it's bowling, hiking, swimming, learning to paddle board, or going to the new Museum of Ice Cream in Los Angeles, even the middle child gets a say at least once," Healy says.

Don’t worry too much if you’re a family of five. Your little Jan of the household will turn out to be a well-rounded, independent, and thoughtful adult, who doesn’t always complain about "Marcia, Marcia, Marcia."