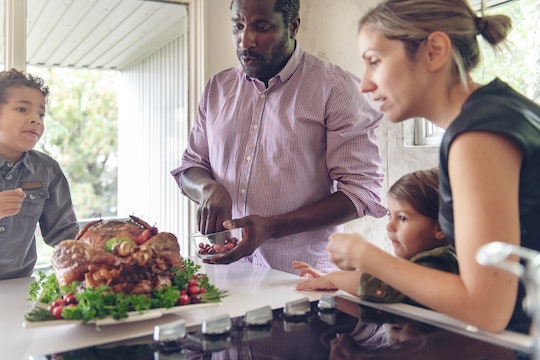 Seasonal Reminder: Do Not Ask Why They Haven't Had Another Kid

Chestnuts roasting on an open fire, Jack Frost nipping at your nose, and Aunt Carol glancing at your toddler then you before asking, "So when are you going to have another baby?"

For the love of ugly sweaters and Yule logs, people, don't do this. I can't believe I even have to say that, because "don't ask people intimate personal questions" seems overwhelmingly self-evident to me. But, as I have friends every year whose festivities are dampened by a clueless relative prying where they shouldn't, I guess I need to spell it out.

I know what a lot of you are thinking "Oh they know I don't mean any harm! Lighten up!" And, OK, that's probably true, Aunt Carol (or Cousin Ashley, or Grandpa Joe, or Mom and Dad). But not meaning harm and not causing harm are two very different things. Think of it this way: did Cousin Vickie didn't mean to ruin Thanksgiving by bringing gluten-free macaroni and cheese with broccoli and raisins in it? Of course not. Did she cause us all irreparable bodily and psychological harm with that abomination of a dish? Hell yes she did and, frankly, she should have known better. (Thanksgiving is not the time to experiment or try to be healthy, Vickie! Come on, now!) Asking people about whether they're going to have another kid is just like that. You might mean well, but you're ruining the day by doing something you should have known not to do in the first place.

Mercy upon your soul if they already have more than one child but not 'one of each' and the words 'So when are you going to try for a girl/boy?' escape your lips.

Unless you're planning to go into reproductive business with another person, another person's reproductive plans and choices are none of your business. Even if you're family, you are not entitled to that information. And hey, I love little ones, too! I'm not made of stone! Whom'st among us doesn't see a toddler in a too-big Santa hat and think "We need at least three more of these next year!" And even though it's natural to be curious, curiosity isn't a green light to start conversations about other people's bodies. I'm pretty curious about the preternaturally long hairs growing out of grandma's chin mole, but I don't bring it up. Trust me, folks: if the people in question have something they want to share with you they will share it.

You don't know what's going on behind closed doors. Maybe one person in the couple really wants another child and the other doesn't and they were hoping to get through one day where they don't argue about it. Maybe they both want another and despite their best efforts it's not going well. Maybe one of them is in the middle of a miscarriage right now.

And mercy upon your soul if they already have more than one child but not "one of each" and the words "So when are you going to try for a girl/boy?" escape your lips. (That's a whole other article for another day, but for now know that it's creepy as hell and no one appreciates it.)

Did you notice that their little family showed up to this merry family gathering half an hour late because of the kid they already have? (Let he who has swiffered poop off the insides of a car-seat's five-point harness throw the first stone.) Or the fact that they haven't been able to talk to anyone because they're too busy chasing their energetic, curious toddler around grandma's un-childproofed home? ("Don't worry, there's nothing she can get into here!" you all say as the child grabs a fistful of trachea-sized candies from an antique crystal dish.) "When are you going to have another baby?" WHEN YOU GET UP WITH THEM EVERY THREE HOURS, UNCLE ERIC!

Or maybe they're blissfully happy as they are, with however many kids they have, and they'd like to focus on how grateful they are to celebrate this holiday with them rather than be told all the ways their family is somehow incomplete.

And so, in parting, let me say to you what it says on my Christmas cards this year: "From Our Family To Yours, Wishing You Joyful Holidays And A Happy New Year... And Please Don't Ask People What They're Doing With Their Uterus(es)."