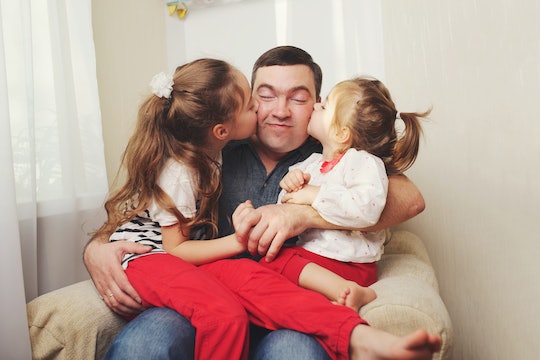 This Joke We Make About Having All Daughters Is Stupid & Dangerous

It's a scene we've witnessed — or even participated in — countless times. You're out and about, minding your own business, when you or someone with you sees a family made up of a mom, a dad, and a bunch of daughters. Or someone you know announces they will be continuing their streak of female children. The more daughters there are, the more likely someone will utter this one joke about having all daughters: "Poor dad!"

More Like This
Vaccinated People Can Ditch Masks. Where Does That Leave Kids?
Is The Tooth Fairy Real?
Here's What Your Kid Is Really Saying When They Tell You They Hate You
If A Tick's Head Gets Stuck When You're Pulling It Out, Here's What To Do

Now some of you — those of you who have already begun rolling your eyes muttering "Oh great, another feminist ranting about the Patriarchy again" — would probably argue, "This isn't limited to dads with families of daughters! We say 'poor mom!' when someone has a family of all boys!" That's true, and you won't hear me saying that the "poor mom" schtick isn't problematic as well. First rule of feminism: when in doubt, it's probably problematic. Second rule of feminism: even when you're not in doubt, there's still a pretty good chance it's problematic. And you're problematic! And you're problematic! Everything is problemaaaaatiiiiiiic!

That said, the issues I have with "poor mom" pale in comparison to the issues I have about "poor dad." Because whereas the subtext of "poor mom" is usually, "Poor mom has a lot of roughhousing and messes to deal with in her future" or maybe, "Poor mom would like some female companionship," the subtext of "poor dad" is deeper... and based in darker realities that continue to harm young girls, women, and, yes, men.

The bases of these jokes aren't born in a vacuum. Context counts.

First of all, I feel like I would be remiss to ignore the historical context of expressing disappointment in having only female offspring. Nowadays, in the United States, there is, fortunately, no real social implications for only having daughters. But historically, and even now, elsewhere in the world, the consequences have been dire. If you don't believe me, just ask Henry the VIII's various wives. Anne Boleyn and Catherine Howard may have some difficulty answering you, on account of their heads being very much separated from the rest of their bodies.

But even if you weren't royalty and reliant on a male heir to assume the throne upon your death (or married to royalty and expected to bear a male heir... even though you have absolutely nothing to do with the Y chromosome required for male-ness in those days), everyday working bums like you and me could easily run into the issue of inheritance: women were often not permitted to inherit property (notable exception: the Muslim world), leaving families of women and girls in a terrible position upon the death of a patriarch. A son would have been expected, though usually not forced, to provide for surviving female relatives. But even in such instances, they were at that man's mercy (see also, the opening premise of Sense and Sensibility).

The stress of this uncertainty must have been awful for everyone involved, from the women facing financial ruin to the husband/father in their life who was legally powerless to help them. And all this is to say nothing of the fates of the girls who were born female-identifying when everyone wanted them to be a boy. Female infanticide remains a problem in places like India and China, where gender disparity is projected to have serious consequences for marriage and romantic prospects, as well as population growth in the coming decades.

People invoke myths of catty, backstabbing women. They talk a lot about 'hormones,' as though hormones were the sole domain of female bodies.

"OK, but obviously I don't mean that!" you may say, and I want to assure you that I know that. But the bases of these jokes aren't born in a vacuum. Context counts. But all right, let's put it aside, because of course you're not (intentionally) joking about something so dire. So what are you joking about?

There's a few directions this joke usually takes, though I would argue it can often mean any of these things all at once without ever needing to be said. The first is simple, straightforward misogyny: girls are awful and groups of girls are even worse.

Essentially, this version of 'poor dad' purports that every obnoxious stereotype about women and girls is true.

People invoke myths of catty, backstabbing women. They talk a lot about "hormones," as though hormones were the sole domain of female bodies. (Sorry folks, we all have an endocrine system. We're all essentially meaty bags of various hormones.) They'll hoot about how dad is in so much trouble because girls blather on and on, even though there isn't a particularly robust body of evidence to support that girls are any more talkative than boys. (And, of course, girls talking is OMG so terrible, amiright guys?! So vapid and annoying! LOL!) They talk about how poor dad is going to go broke with so many girls in the house, because all girls love to shop. And, of course, girls are naturally going to emasculate, manipulate, and henpeck the father of the family — just being around so many girls is going to sap the manliness right out of him.

Essentially, this version of "poor dad" purports that every obnoxious stereotype about women and girls is true.

"I don't mean that girls are terrible!" some of you may still protest. "Stop being so sensitive, snowflake! What I mean is that poor dad doesn't have a boy to hang out with! You know, a football buddy! Someone to share his interests! He must be disappointed!"

At best, this interpretation imagines a naturally occurring, unbridgeable gap that exists between men and women. At worst it intentionally excludes female children from bonding activities with their dad based exclusively on her gender. Either way, it perpetuates the notion that a little girl cannot be interested in "guy stuff" and, as a result will be a disappointment to her father.

"Ugh! You're twisting my words! What I mean is "poor dad" because he's going to have a heck of a time protecting all those girls!"

To which I will ask: "Well, what do you mean by protection?" and, "Why would he be any less protective of daughters than sons?" If you're talking about the generally more difficult time women and girls have out in the world as compared to boys and men then please remember that it's not a joke and, instead, calls for more of a "what can we do to make this better?" commentary than "poor dad." If you mean "protection" as in "no boys are ever allowed to look at his daughters because he is going to be protective of them," then I say that's gross and creepy and maybe let's get away from the idea that a father owns his daughter's body and sexuality until he hands her off to her husband.

At best, this interpretation imagines a naturally occurring, unbridgeable gap that exists between men and women. At worst it intentionally excludes female children from bonding activities with their dad based exclusively on her gender.

"All I meant," you may be growling right now, "Is that poor dad doesn't have anyone to carry on the family name. Daughters' names change when they get married, so sons are the ones to carry on the legacy." And to that I say, "Welcome, time traveler from a bygone age! I am pleased to inform you that girls are no longer required to get married or take their husbands' names in this brave new world. Also, those are not evil spirits in that box in the living room: it's a television!"

Come on, dudes. Keep up. This isn't hard.

And so, whatever your motivation for letting out a "poor dad" crack, kindly save it. It's a mean-spirited joke with no basis in what a father/daughter relationship is destined to be. It is a myopic, misogynistic viewdeeply rooted in a dark history that has undervalued girls and women and men's ability to connect with them. We can, and must, do better than this for our daughters. We must expect more of their fathers.