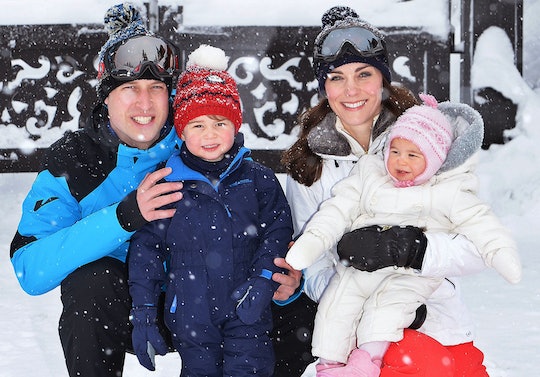 Prince William and Kate Middleton strike me as the type of parents who like to do outdoorsy-type things with their children. When the Duchess of Cambridge designed a "Back To Nature" garden this summer, her children clearly enjoyed it. But of course, we all know that it's pretty easy to like the outdoors when the weather is nice. But what about when it's cold? Do Prince George and Princess Charlotte ski, for instance?

The Duke and Duchess of Cambridge are both avid skiers themselves, so it certainly would make sense to see their 6-year-old son Prince George, 4-year-old daughter Princess Charlotte, and one day their 1-year-old son Prince Louis, follow in their footsteps. In fact, as E! News reported, the couple first made their relationship public and official after taking a ski trip together in 2004 to Klosters, Switzerland. It stands to reason that the couple would have something of a sentimental attachment to the sport they might want to pass on to their three children these 15 years later.

So, of course, no one should be surprised by the fact that the Cambridge family hit up the slopes in Trois Vallees in France back in 2016 when Prince George was just 2 years old and Charlotte was a baby, as Hello! Magazine reported at the time. Sure, the kids were too little to really ski (Charlotte was just 9 months old and presumably not walking yet), but look how cute!

The ski holidays have continued since then, apparently. This past February, when Prince George was on a school break from his first year at Thomas's Battersea School in London, the entire family reportedly went on a ski holiday together. And considering the fact that both Middleton and Prince William tend towards encouraging their kids to stay active, it makes sense that Prince George and Princess Charlotte might be in the early years of learning to ski. She did recently sign them both up for competitive tennis, as Elle previously reported; skiing does not seem like a drastic leap.

As for sweet little Prince Louis? I have a feeling he might just hang back at the ski chalet and focus on the apres-ski.

Even if Princess Charlotte and Prince George are still not quite ready to enjoy skiing, there are other ways to enjoy the snow. Make a snowman, go tobogganing, bake cookies inside with your mom while it snows outside. Whatever the little royals do, I'm certain their winter will be loads of fun.