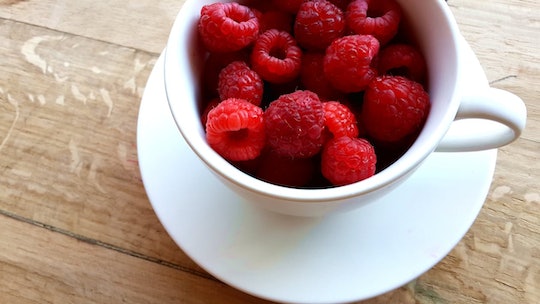 The Truth About Raspberries & Labor

A woman who is ready to give birth (so like every mom-to-be during the last few weeks of pregnancy) is willing to try anything to induce labor. Well, almost anything. Castor oil sounds gross enough, but one option everybody throws around is raspberry leaf tea. I'm not a big tea drinker unless it's PG Tips with a splash of milk or an iced green tea, so the raspberry leaf tea sounds like absolute torture to my taste buds. But can you get the same results with some raspberries? Do raspberries induce labor or is it specifically a raspberry tea that makes the magic happen?

Apparently, raspberry leaf tea doesn't exactly induce labor. According to Baby Center, raspberry leaf is thought to tone the muscles of your uterus so that they work more efficiently and can help your labor progress at a steady pace. It also takes more than a glass or two to see results. Women are advised to start drinking it when they are around 32 weeks pregnant and to keep drinking it so it builds up in their body.

But What to Expect noted that there's no proof that raspberry leaf tea actually does anything except give you tummy troubles and make you run for the bathroom. Like castor oil, the side effects of chugging raspberry leaf tea are not worth any potential labor help, so many moms skip the practice entirely or make sure to ask their doctor for permission before attempting the herbal drink.

Eating raspberries, on the other hand, may not give you too many tummy troubles, but it probably won't induce labor either. According to the website for OB-GYN North, there is not enough research to support the claim that any foods are effective when it comes to inducing labor. The only fruit that's considered to help induce labor is pineapple and even that's not entirely accurate. OB-GYN North noted that pineapple is thought to be a cervical ripening agent and even that hasn't been proven.

In short? It won't hurt to eat some raspberries, but it probably won't push you into the labor and delivery ward anytime soon. Combine it with some pineapple or a spicy snack if you really want to try, but grab some Tums, too. Because that sounds like a terrible combination.