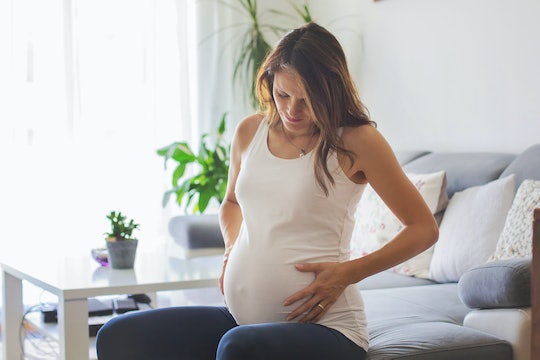 During my pregnancy, I experienced a ton of Braxton Hicks contractions. This was not only annoying, but a constant source of worry that bordered on paranoia. The constant tightening and release of my abdomen had me repeatedly questioning my own judgement of my body and second-guessing my instincts. I didn't know how the false contractions would compare to the real thing. My Braxton Hicks were irregular — coming and going at odd intervals — and I'd been assured real contractions were more timely. But early labor being what it is, I needed to know, do real contractions come and go?

Labor can take long hours or even days, and contractions aren't always the first sign that it's setting in, noted The Cleveland Clinic. That's a part of what makes differentiating between the annoying and sometimes painful false contractions known as Braxton Hicks, and the real labor contractions that precede childbirth, so difficult. While the website noted that true contractions do come and go, and they can be extremely irregular in the beginning, they have some fairly defining characteristics that characterize them as actual labor contractions. Sutter Health suggested that the closer you are to birth, the closer and more regular the contractions will become, so it's important to keep a record of their timing. You should note the time between the beginning of one contraction to the beginning of the next, and that will give you a good idea of their regularity.

To be honest, I was completely convinced I was in labor about 111 times before I actually started contracting with my son. It wasn't until my OB-GYN talked me off the proverbial cliff that I was even aware of my own paranoia. I simply thought my son was maybe a little early, and a little anxious, just like his mom. She told me that when the real contractions hit, I'd know.

This proved to be both entirely unhelpful advice and entirely true. For one, my Braxton Hicks still felt like real contractions to me, because I had no base of knowledge on what the real deal would be like. She was also correct because when labor hit, it brought the pain and the ruined underwear. It also brought a headache, general queasiness, and diarrhea. Which apparently isn't uncommon, according to labor and delivery nurse Nina Kwon of New York City. She tells Romper that real labor contractions bring a host of other symptoms with them that let your doctors and nurses know they're the real deal.

I asked Kwon, "Do real contractions come and go?" She tells Romper, "Of course, that's the nature of the beast. But they come and go more regularly the closer the baby is to arriving." She says that they are also quite a bit more painful than false contractions and that they're often joined by leaking water, streaks of blood in your discharge, and sometimes less pleasant symptoms like vomiting and diarrhea.

"If you're contracting at regular intervals, you're probably in labor," Kwon says. "When you come in to L&D is based on the plan you've made with your OB in advance, but a good rule of thumb is for your contractions to be about a minute long, hitting you around every five minutes, and for that to keep up for like an hour." She notes that if you live farther away from the hospital, or if you live in a traffic-dense city like New York, you may need to amend this plan.

Real contractions come and go, but real contractions will start to come and go more evenly and regularly as they progress. However, if you ever feel like something is off, or if you're having more Braxton Hicks than you have had previously, contact your OB-GYN because it's better safe than sorry. And if you're really in labor, good luck.