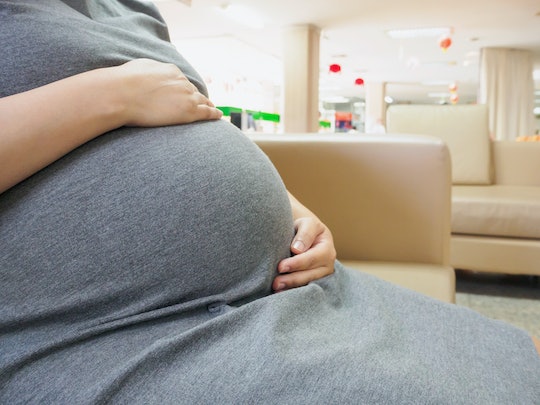 Everything You Need To Know About Your Bloody Show During Pregnancy

Picture it: Canton, Ohio, 1999. A girl sits in her junior high health class learning about childbirth. For some Godforsaken reason, the gym teacher brought a video and props. Everyone present — all girls — were horrified. Then the gym teacher says, "And the bloody show." I'm sorry? What is the bloody show during pregnancy? Figuring it out was a weird mixture of needing to know more while simultaneously wondering if there's a doctor out there willing to sterilize your 13-year-old womb to prevent that from ever happening. I mean, this was only after last week's horrific, error ridden lecture about your hymen, which is making you think that sex is possibly the worst idea anyone has ever had.

Can you tell I went to an abstinence-only school? I think their motto was "scare their legs shut." It worked for 11.5 seconds. After that, I was the neighborhood taxi for my friends to visit my aunt at Planned Parenthood.

Seriously, though. The bloody show sounds like a horrible thing, but in truth it's really not that big of a deal. Sure, it has possibly the worst name in medical nomenclature, but it's been in literature as "the bloody show" since before obstetricians even existed. It's a phrase with staying power: much like the mental image of my gym teacher squatting in her gray athletic shorts and tube socks to show how she gave birth. I seriously hope she wore knee high socks for the occasion.

According to Obstetrics and Family Medicine, the bloody show is just the streaks of rust-colored blood that are present when you lose your mucus plug. That's it. It's not the mucus plug itself, though. That mucus plug is merely the vehicle for cervical blood. Most women, according to the journal, will only lose a tablespoon or two of blood from their cervix into their mucus plug. It should be mostly dark red or brown, but there may be a few drops of bright red blood. If there is a lot of blood, or if it's all bright red, you need to call your provider immediately, as it can be a sign of placental abruption or placenta accreta, according to Bleeding During Pregnancy.

You also might never notice your bloody show because some women don't lose their mucus plug until they're in active labor, and, at that point, what isn't coming out of your vagina? (Or going in, for that matter.) Sometimes, it feels like everyone and their brother's hand is in your hoo-ha, along with possibly a catheter, poky things breaking your water, and maybe even a rubber chicken. I just remember a lot of action in my vag when I was in labor.

What is the bloody show if it's dark brown and not red? Why not call it the "old bloody show?" Well, according to Bleeding During Pregnancy (not a creatively titled book), it's the blood that is released from the cervix as it softens. It's between the mucus plug and the proper cervical opening, so it has time to clot and gain its dark brown color before the mucus plug is lost. If it happens more swiftly, that's when you will occasionally see drops of bright red blood mixed in with the older blood.

While the bloody show sounds like the alternative title for Game of Thrones, it's actually a very simple process that's a biological indicator that your body is preparing for childbirth. When I had my "bloody show" I was definitely grossed out, and more than a little miffed I'd ruined my knickers, but it took days after that before I went into labor with my son, much like how we now have to wait two freaking years for the return of the truly bloody Game of Thrones.