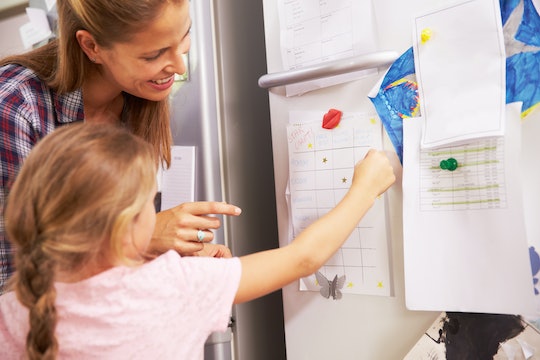 Experts Weigh In On How Reward Charts *Actually* Work

When I was in elementary school, I lived for reward charts. Each shiny star beckoned to be placed next to my name for completing a particular task and I beamed when I earned one. I also discovered in my teenage and adult years that my craving for high-level accomplishment, albeit admirable, deeply contributed to the self-imposed pressure I routinely placed on myself to achieve perfection. Looking back, I can see where these systems helped me to accomplish goals, but they also may have made me, well, stressed. So I wonder, "Do reward charts really work?"

Rachel Robertson, vice president for education and development at Bright Horizons, says in a school setting "it is important to remember that the use of these charts can often lead to public embarrassment and shaming, even though this is never the teacher’s intent."

Robertson explains that even though teachers do not mean harm by using reward charts, there is an opportunity to look at these systems in a different way.

"Given that educating is all about teaching new skills, challenging behavior should be considered an indication of a skill a child needs to develop (e.g. impulse control, emotional regulation) rather than a need for discipline," she tells Romper in an email interview. "With this mindset, and really engaging learning experiences, children are very often self-motivated to manage their own behavior without the need for potentially distracting and embarrassing external controls like a behavior chart."

Robertson says it is important to keep in mind that reward charts typically lead to public embarrassment and shaming, even though this is never the teacher’s intent. "By adding an unnecessary level of stress for children to 'behave,' this system can interfere with the focus on learning," she says.

As for parents and caregivers who are curious about using reward charts, Robertson says they should instead focus on "building intrinsic motivation for children, not what can be a superficial motivator like a reward chart." She explains that reward systems can imply that a child will misbehave, as opposed to assuming that they are doing their best, "even if that does include some challenging or mistaken behavior at times."

"Charts like these can be misleading, assuming that all behavior is a choice and that a child should be punished if they behave in ways (e.g. they struggle sitting still for long periods of time) that are often developmentally typical," Robertson says.

But Amy Przeworski, Ph.D., an assistant professor of psychology, noted in a Psychology Today article that "children learn about what behaviors are acceptable and not acceptable based on the consequences of them. If you want a child to do a behavior more often, a reward will help." Przeworski maintained that consistency, meaningful rewards, and clarity about what behaviors you are trying to change can make the reward chart a useful tool.

If you do decide to make a reward chart for the home, then consider involving your child so that it includes something they enjoy, like dot-to-dot (drawing a line for each completed task) or color by number. Be sure to also include a task that involves one-on-one time with you, according to Supernanny.

If your child's teacher is using a reward chart and it's causing anxiety about attending school, then have an honest conversation with them to explain your child's feelings. If necessary, include the principal and other administrators to get your point across.

As for me, I don't know if I ever will see the back-to-school section and turn the other way. Highlighters, color coded folders, and my label machine are what makes this world of mine go-round. I know, I know. But I'm happy to report that my 30s have meant relaxing the rules a bit — and I'm still in one piece.