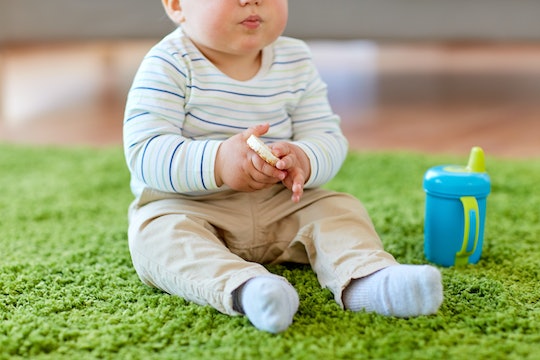 The sippy. Many parents live and die by this beloved lidded cup. And one can see why. When one hands a container of juice to a 30-inch high human who has a 98 percent chance of falling over at any second, it’s a safe way to keep one’s shoes from reeking of Apple and Eve. But are sippy cups actually OK for children? Do sippy cups cause crooked teeth?

My child was never really fond of sippy cups. When I cast my mind back, and try to remember the sippy cup-era and how it all went down, I remember absolutely nothing. Because is it just me, or is there some sort of mom memory wipe that seems to occur with these kinds of details? Maternal Sunshine, if you will? All of those things moms are convinced will stay with them always, and then a year later someone asks what your child’s first solid food was, and you're like, “Banana? Maybe?” Anyway, in my memory it kind of seems like my kid went straight from my nipple to a Contigo bottle.

Sippys were invented in the '80s by a mechanical engineer named Richard Belanger, reported New York Times. Belanger was a weary dad who was tired of cleaning up his kids’ spills. I'm guessing he sat down one day, stared at his soaked parachute pants, and thought: "What if that cup had a damn lid?"

He sold his genius idea to Playtex, and now lives in The Playtex Mansion, where he wears designer smoking jackets made from swaddling blankets and spends the day drinking Dom Perignon from a sippy shaped like PJ Masks. OK, that second part is only what I wish to be true, but he really did invent the sippy and sell it to Playtex.

Today, this little cup is so ubiquitous many parents just assume it’s a natural stage of child development: just as every toddler shall eat dry Cheerios, so shall they drink from a sippy. But the thing is — Belanger was an engineer. Not a dentist. And his design was more about keeping his rug clean than about how it might affect a kid’s mouth.

Romper chatted with Mark Burhenne, DDS, founder of AsktheDentist.com and the #1 bestselling author of The 8-Hour Sleep Paradox. And he is not a sippy fan.

OK, so sippys aren’t a stand-in for nursing. Got it. But can they actually lead to mouth problems? According to Dr. Burhenne: Yep. “In addition to the mouth structure, the face shape can develop improperly, leading to mouth breathing, gag responses, dry mouth, chapped lips, and Angular cheilitis."

Boo. Not only that, Dr. Burhenne says sucking on a sippy all day can lead to speech issues. And more bad news — according to ABC News, there are actually a lot of sippy cup-related injuries, with kids running around with them in their mouths and falling down. Toddlers have cut their faces and even broken their teeny teeth.

So alas, it seems an open cup, preferably one filled with water, is best for kids. Though this isn't to say parents necessarily need to toss all of their sippys into the sea. If a sippy is needed here and there, a little use is probably OK. Just maybe don't make it the automatic go-to, or let it become attached to a child's face. And even if your kid doesn't use it, I recommend holding on to one for one's own personal use. That SpongeBob sippy is an excellent way to transport a roadie of wine in a taxicab en route to one's birthday dinner. And I know of what I speak.