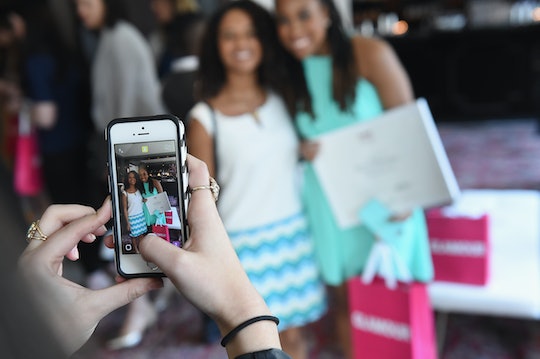 Do Snapchat Filters Really Lighten Your Skin? The Social Media App Has Come Under Fire

Critics have a message for Snapchat: Give the alleged whitewashing a rest. Users of the popular social media app have been taking to Twitter to complain about their "pretty" and "beauty" filters recently, with many pointing out a distinct pattern in the way the filter changes their looks. But do the Snapchat filters really lighten your skin?

The use of filters to smooth out lines and create an idealized version of yourself is nothing new, of course. Movie stars have been using filters for decades and Instagram got that ball rolling back in 2010 for us regular folk by allowing users to make changes to their appearance (which is why IRL we all get to look like trolls whenever we want, thank you Instagram!). Awkward selfies became a thing of the past, with users able to whiten their smiles, smooth out lines, and get rid of blemishes at the click of a button. What's not to love about that, right?

This new "beauty" filter of Snapchat, though, is a whole different ballgame. Users are crying foul over the purported whitewashing, complaining that their skin is noticeably lighter after the filter has been applied. Apparently it's one thing to soften your edges a little (or try on a dog nose and ears, if that's your bag), but another story entirely to have the tone of your skin changed to what Snapchat has deemed a "prettier" version of you.

The new "whitewashing" beauty filter was initially meant to offer users that "summer festival vibe", inspired by the legendary Coachella festival and complete with a digital flower wreath plus a super white girl face. The flower wreath, sure, but lightening everyone's skin (not to mention the tinier nose and more defined jaw) so they can all be a more uniform kind of pretty? Just no.

This isn't the first time the social media app, best known for its ever-growing hilarious emojis and live video chatting, has made a fairly serious blunder. Back in April, Snapchat came under serious fire for using (what some called) digital "blackface". The app introduced a Bob Marley filter (complete with a change in skin tone and dreadlocks, to pay homage to the legendary singer on April 20, a day of celebration for pot enthusiasts.

Snapchat released a statement claiming the filter was created in the spirit of respect. "The lens we launched today was created in partnership with the Bob Marley estate, and gives people a new way to share their appreciation for Bob Marley and his music," the statement read. "Millions of Snapchatters have enjoyed Bob Marley's music, and we respect his life and achievements."

So here's a thought from me to you, Snapchat. Ditch the pasteurization filter, please never try blackface again, but stick with the flower wreath and dog nose. Everyone seems pretty pumped about the dog nose.