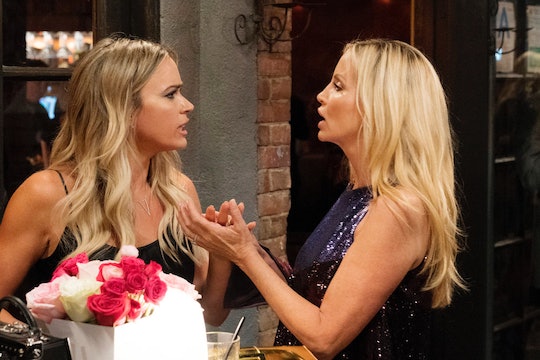 RHOBH's drama-filled RV trip continues, and after their earlier spat, fans may be wondering if Teddi Mellencamp and Camille Grammer talk now. Unless you count lashing out at each other on Twitter, it seems safe to assume they aren't on speaking terms right now. Neither Housewife has come forward in recent weeks teasing a makeup in upcoming episodes this season, and Teddi's Bravo blogs grow more and more acrimonious as the weeks go on.

In an Apr. 23 entry, Teddi revealed that she regretted attending Camille's wedding, and in a more recent post on May 7, she called Camille "just plain rude," insinuating that she was two-faced. Recounting their earlier argument, Teddi writes:

Camille says I insinuated myself into Dorit and Kyle’s conversation. Great. I did. I had an opinion. But…let’s rewind the tapes, shall we? Just last week, Dorit and Kyle were having a conversation at my dining table and, gasp, Camille “insinuated” herself into that conversation by telling Dorit she hadn’t heard about her until two years ago, something that was more insult than opinion. So I’ll take know-it-all over just plain rude.

For her part, Camille addressed one of Teddi's complaints about her from the RV trip — that she was wishy-washy — in a RHOBH after show clip.

Camille agreed that she does come off as wishy-washy at times and chalked it up to a lack of confidence on her part, stemming from a childhood dyslexia diagnosis. "I am a bit dyslexic so I'm not good at using my words at times," she explained. "It's getting over the lack of confidence because of the dyslexia and how to use my voice and speak. I was always so guarded with speaking up...I've had to work hard at it."

Kyle Richards, for one, agreed with Teddi. She claims that she's pointed out to Camille in the past that she's a people-pleaser, which often undermines her own thoughts and feelings when they arise. This is what Kyle believes is at the heart of Camille being positive and friendly to people's faces, while talking cruelly about them behind their backs (especially when cocktails are involved).

Teddi addressed this two-faced tendency of Camille's on the RV trip, to which Camille memorably replied, "My face is right here," goading Teddi into getting whatever she needed off her chest. On her blog, Teddi wrote, "Yes, while Camille’s face was right there tonight, she still left at least three others at home. Strap that on for thought."

Despite the mixed metaphor, Teddi has a point. But I'm sympathetic to Camille's personal baggage, too, and if the two actually took the time to hash this out, they'd probably find empathy for each other — Camille for Teddi's frustration with her wishy-washiness, and Teddi for Camille's intellectual insecurities. But instead, Camille decided to make a dig at Teddi's age, calling her an entitled millennial, which Teddi turned right back around on her.

This is quickly becoming a feud that's just as exhausting to watch as Puppygate, but it doesn't seem to be ending any time soon.