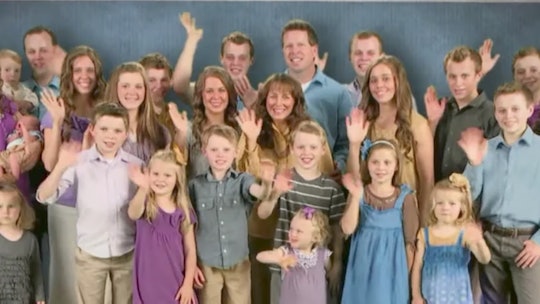 The Duggar family doesn't drink alcohol. I mean, they really don't drink it, not even a pint of green beer or anything. And when you think about St. Patrick's Day, with the drinking of the green beer (generally in copious amounts) at your local pub with a raucous bunch of revelers, it doesn't seem much like a Duggar thing, does it? It's hard to imagine the Duggars celebrating St. Patrick's Day.

St. Patrick's Day is celebrated around the world but mostly in pubs on March 17, in observance of the death of St. Patrick, the patron saint of Ireland. The legend of St. Patrick is that St. Patrick, who came to Ireland as a slave in the fifth century, brought Christianity to the country. Lore surrounding the patron saint of Ireland has grown throughout the centuries, and what was once a time for Irish Catholic families (who were observing the Lenten season) to visit church in the morning and enjoy a feast in the afternoon has turned into... well, you know. Parades, shenanigans with hooligans, drinking beer, and dancing to Celtic trad music into the wee hours of the morning. Not really in the Duggar wheel house, except perhaps some members of the family do seem to acknowledge it.

Back in 2014, Jessa Duggar's husband Ben Seewald posted a picture on Twitter of his wife wearing a shamrock temporary tattoo on her hand with the caption, "Happy St. Patrick's Day!" Which tells fans they know St. Patrick's Day exists, at the very least.

Although it seems like the Duggars might have celebrated St. Patrick's Day in their own way, at least in the past. Back when TLC was still filming the entire Duggar brood raised by Michelle and Jim Bob Duggar in 19 Kids & Counting, there was actually one episode dedicated partially to St. Patrick's Day. During Season 2, episode 16, which was called Duggars and Dentists, the family dressed in green in honor of St. Patrick's Day. And they didn't stop there. They sat down to a fully green breakfast, according to the blog Duggars Reviewed, complete with green pancakes with green maple syrup, green frosting on cinnamon rolls, and green milk. So they really focused heavily on the green element, I guess, but not so much the "Whiskey In The Jar" business my own Irish family relishes.

Of course, the Duggars aren't above celebrating a good old family holiday. Christmas seems to be a big one for Jim Bob and Michelle's ever-growing brood, and I shudder to think of what that grocery bill looks like every year. They also enjoy Thanksgiving and Easter and apparently, even the occasional sly nod towards good old St. Paddy's Day. But there's one holiday which, unsurprisingly, is as unwelcome to them as the full-body hugs of unmarried women and knee-length skirts... Halloween.

Michelle Duggar wrote about Halloween in a 2011 blog post:

While we do go to pumpkin patches and corn mazes, we don't do the Halloween thing. From the beginning of our marriage we just kind of felt like we didn't want to celebrate that holiday. But we enjoy the harvest celebration. Our church fellowship has had different celebrations through the years that we've been a part of, ones where the children can play games and receive candy and toys and do all kinds of fun things, like a cake walk.

So here's a quick rule of thumb to Duggar holidays; children having gently themed-fun to feel included in the spirit of the holiday, yes. Drinking green beer out of a stein wearing a "Rub Me I'm Lucky" t-shirt, or celebrating leprechauns, witches, and other magical beings? Not so much.