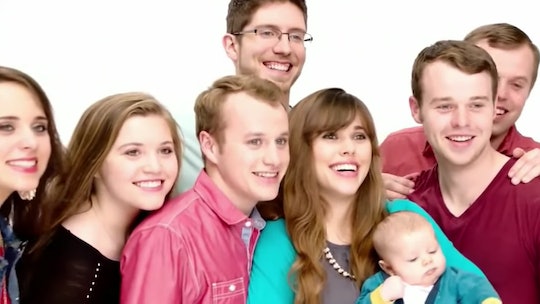 Religion & Faith Are Important To The Duggars, But Do They Choose Godparents For Their Kids?

With all the emphasis on faith in the Duggar households, it’s interesting that fans haven’t heard much about one traditional and religious part of welcoming a new child: godparents. As such, you may be wondering if the Duggars even choose godparents for their kids. The family is well-known for being deeply devoted to their Baptist faith, so it would seem like they’d want all the help they could get with providing a spiritual foundation for their children. But they’ve never commented, either on their blogs or in interviews, on anyone serving as godparent in the lives of any child.

The role of godparent can be as varied as families are. For many people it is a ceremonial role in a child’s baptism, someone to stand as a witness to the event. According to Got Questions, some faiths call these people “sponsors” as they are considered to be making a statement of faith on behalf of the child, sort of sponsoring them into the faith. As Christening Essentials explained, godparents originated to provide someone to look after a child’s spiritual development, but for many people the role is now that of a supportive friend, interested in, but not necessarily involved in the child’s upbringing.

More and more Duggars are becoming new parents, so there may be the possibility that one of them will decide to bring godparents publicly into the life of their child. Joy-Anna Duggar is a new mom as of Feb. 23, and Jinger and Kendra are each expecting their first respective babies. None, however, have revealed if they've chosen godparents for their bundles of joy.

Even if the Duggars don't opt to have godparents in their children's lives, many parents do. Parents want a godparent to be involved in their child's life in a variety of ways and these days, according to Reuters, the godparent is often someone who can offer something to a child’s upbringing in the way of social or cultural experience. "Parents usually select godparents who will bring something to the mix - for example, adventure, glamour, sporting prowess, culture, humor or sociability," said Jo Bryant, an etiquette advisor for Reuters. Bryant also pointed out that it’s not a responsibility to be taken lightly. If someone can’t be there on special occasions, or isn’t willing to remember birthdays, holidays, and other significant events it’s best to bow out and decline the invitation.

Perhaps the sheer size of the Duggar family (24 adults in all) means that Jim Bob and Michelle Duggar, as well their kids — many of whom are now parents themselves — are confident that there is enough spiritual influence surrounding their young ones, and plenty of people to step in should parents become incapacitated. Or maybe the family is hesitant to provide a spiritual role in the lives of any of their children besides that of their parents. Whatever the case may be, it’s not something they have felt the need to make public, despite nearly every aspect of their lives being on display for cameras.

Their religion, Independent Baptist, does not adhere to infant baptism, so it may just be that we haven't seen godparents on screen at such an event. Since the show hasn't been around for all of the Duggar births, it's unclear if any of the Duggar children were baptized as infants or if it happened later in their lives. But it is known that some of them, like Jill Duggar, have chosen to be baptized as adults, as In Touch Weekly reported. And eight of the kids plus Jim Bob and Grandma Duggar were also re-baptized during a 2011 trip to Israel, according to Hollywood Life.

The Duggar's children have maintained many of the traditions that they grew up with, but as they begin new families they may decide to forge a few of their own as well. So while fans haven’t seen godparents brought into the fold yet, it hasn't been totally ruled out either. As more of the original children marry, they’ll be joining with husbands and wives who each come from their own set of traditions. Don’t count godparents out of the mix altogether yet.

More Like This
Priyanka Chopra Posed On The Cover Of 'Vogue' With 1-Year-Old Daughter Malti
Sally Field Is The Ultimate Cool Mom Who Once Tried To Set Her Son Up With An Olympian
Marie Kondo Gives Up Tidying Post-Kids, Sparking Joy For Moms Everywhere
Keke Palmer Casually Drops Her Baby's Sex On Jimmy Fallon
What Parents Are Talking About — Delivered Straight To Your Inbox