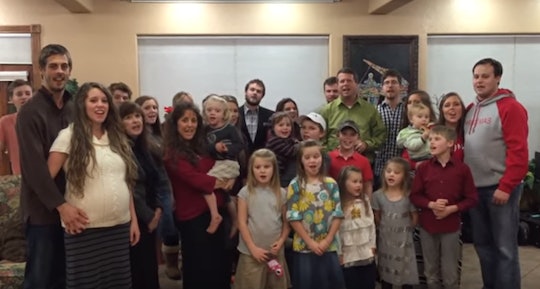 Here's Why The Duggars Don't Do Christmas Trees

Growing up, my family went all out with the Christmas decor. There were the plastic reindeer and inflatable Santa, the multi-colored lights and garland around the staircase, and, of course, a big holiday tree. And like most kids, I loved decorating the tree with ornaments, ribbons, and lights. But I can't help but wonder how trimming the tree would work with more than 19 people in the house, like with the Duggar family. In fact, do the Duggars even have a Christmas tree? Turns out, the Counting On brood has had a tree in the past, but they ditched the evergreen to focus the holiday's religious aspect.

If you have followed the Duggars through the years, you know that the conservative Christian family has a lot of unique holiday traditions. Fans first saw how the Duggars celebrate Christmas on TLC's 19 Kids and Counting, and followed those traditions through to Counting On. One thing that has been missing from their festivities, though, is the tree, and for a deeply religious reason.

Matriarch Michelle Duggar explained to People back in 2014,

We celebrate Jesus' birthday. So we have a big Happy Birthday Jesus banner and we really try to focus on the real meaning of Christmas.

In addition to the holiday banner, the Duggar family holds readings from the bible, and displays an elaborate nativity scene every Christmas season, according to The Daily Mail. Mom Michelle said of their unique holiday traditions, the Daily Mail reported back in 2014,

I think the fun part about it is that we make precious memories together as a family and just getting to sit down with all of us in the living room and have Dad read the story of the first Christmas, the Scriptures and Luke and getting to sing Happy Birthday Jesus and having a special celebration, we look forward to it the whole month of December.

She first explained the Duggars' relationship to Christmas in a 2013 blog post for TLC, Back then, Michelle described their annual holiday celebration, which also includes a buffet and gift-giving, as "a big birthday party for Jesus," which they begin to prepare right after Thanksgiving.

Michelle wrote at the time,

Our goal was to bring out the real meaning of Christmas. It was Christ's day, the holy day of mass, Christ mass and what we're celebrating is the day that Christ was born. We explained that to them from the beginning and how it is a huge celebration. We really make it a big deal.

But don't expect these Christmas traditions to end with parents Michelle and Jim Bob Duggar. Their children, many of whom have growing families of their own, have started to carry on the holiday customs they grew up with. Just watch this Instagram video shared by Jessa Seewald last year, showing fans how her household prepared for Christmas.

To be honest, Christmas is more of a family tradition than a religious one in my household. And even though I don't identify as Christian — or agree with the Duggars on anything — I can at least appreciate how the family chooses to honor their beliefs during a holiday season often overshadowed by commercialism.