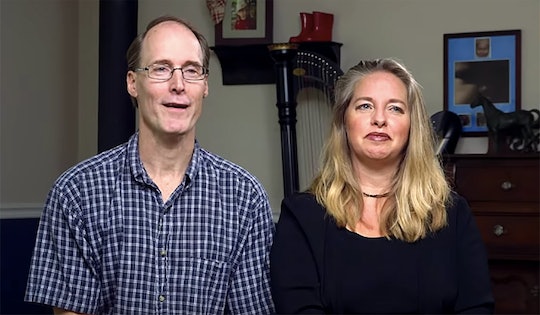 Welcome to Plathville stars Kim and Barry Plath have nine kids between them, 10 less than another famous TLC family, the Duggars. But despite the difference in size, these families have more in common than you might think. And although the Duggars seemingly don't know the Plath family firsthand, they are connected by this particular family member.

TLC's Welcome to Plathville premiered in November, showcasing the lives of Kim and Barry along with their children: Ethan, Hosanna, Micah, Moriah, Lydia, Isaac, Amber, Cassia, and Mercy. The family live on a farm in Georgia, and they eschew technology in favor of communing with the outdoors. Kim and Barry also homeschool their kids, so when you combine the lack of technology and public education, it's fair to say their brood is pretty sheltered comparatively to other families in the United States.

If you follow the Duggars, then you've probably already noticed some similarities between the clans. The Duggar kids didn't watch TV growing up, and technology was greatly limited in Jim Bob and Michelle Duggar's Arkansas home. The two families also reportedly subscribe to a conservative religious movement called "Quiverfull", with the Plaths starring in a documentary related to the belief system in 2017.

When it comes to actually knowing each another, there is a small connection thanks to Anna Duggar. Anna's brother, Nathan Keller, is engaged to Nurie Rodrigues, who is the daughter of Jill Noyes Rodrigues. "I am so excited to get to marry the man of my dreams. He is truly everything I prayed for in my future husband," Nurie wrote on Instagram in November. "He is a man who fears God and seeks to please him in all he does."

The Rodrigueses attended the wedding of Hosanna in June 2019, as In Touch Weekly reported, meaning there is a small degree of separation between the Plaths and Duggars.

I don't believe the Duggars have spoken out about the Plaths or are close to the family like they are with UPtv's Bates crew, but it's possible they're friendly with them in private. For now, however, it appears Anna's younger brother is the closet link between the Plaths and Duggars.