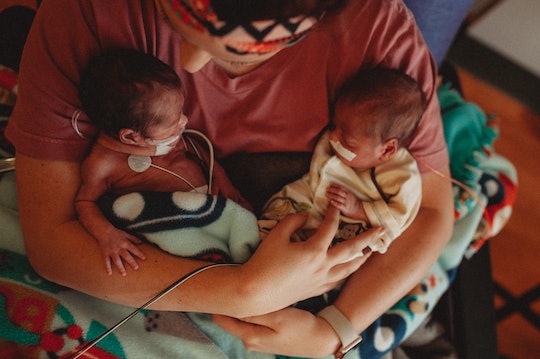 Why Do So Many Twins Go To The NICU? Here's What The Experts Have To Say

It's not uncommon for moms of multiples to worry about delivery complications for their babies (how else are you supposed to feel when you're labeled "high risk," anyway?). You've probably heard a lot of complicated birth stories in online mommy groups, but do twins have to go to the NICU as often as it seems? Relax, mama, the odds are in your favor.

For parents of multiples, the NICU fear often stems from the fact that moms typically deliver before 40 weeks gestation. Neonatologist Sataporn Muang-In, M.D., F.A.A.P. tells Romper that while it's "more likely" for moms to deliver twins before 40 weeks, it's not always because their body naturally goes into labor that early. He explains that some moms may carry their twins just fine but there could be doctor intervention before 40 weeks because "the risk of perinatal mortality increases in the twin pregnancies at approximately 38 weeks of gestation" (meaning it's likely safer to deliver them a little early).

Rachel Urrutia, M.D., M.S.C.R, an OB/GYN at the University of North Carolina at Chapel Hill, tells Romper that "50% [of twins] are born at 37 weeks and beyond (full term)," and of the other 50%, only "20% of twins are born before 34 weeks." As for the 30% of twins born between 35 and 37 weeks, Dr. Urrutia says "most of those can go home with their mother after a standard hospitalization time." Even better, she says, "Only 10% of the time are twins born very early (before 32 weeks), so the vast majority of time, twins are born at a [point] where even if they have to spend some time in the NICU, their long-term outcomes will be very good."

That's not to say a twin pregnancy is no different from a singleton pregnancy (aside from the obvious physical toll). Dr. Muang-In says "it is known that the common complication of multiple pregnancy is preterm birth," even without intervention. "We do not fully understand the reasons behind this, just as we do not fully understand all the reasons behind preterm birth in singleton pregnancies," Dr. Urrutia says, adding, "in a nutshell, almost all high-risk pregnancy-related conditions are increased with twins. This includes spontaneous preterm labor, preeclampsia, diabetes, bleeding and others." The most common assumption among experts is that the increase in risk "is probably due to extra demands on the pregnant person's body and on the placenta," she says.

There are also instances of only one twin being admitted to the NICU, which can happen when "one twin has a birth defect and the other does not," says Dr. Urrutia. "Or, in some cases one twin grows bigger than the other. In other cases, if twins are born near term, one might do just fine and the other might be in need of special care in the NICU."

In general, chances are good that your babies will be perfectly healthy and won't have any need for a NICU stay. Being a twin does not make either of your babies a shoo-in for intensive care. So take comfort in those odds, along with the knowledge that you might get out of pregnancy two weeks earlier than many singleton moms do (in all fairness, you earned it).