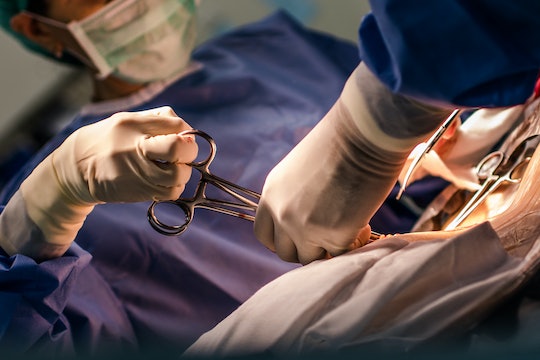 No matter what kind of birth plan you have in place, you probably have a good idea of what you want labor to look like. For a mom with a tilted uterus, she may feel like she doesn't have a lot of control, thanks to the direction of her uterus. But do you have to have a C-section with a tilted uterus or is the unmedicated birth you've always dreamed of still in the cards?

While a tilted uterus isn't an issue on its own, it's even less of an issue when you're giving birth. Choi notes that as your uterus enlarges with pregnancy, it lifts out of your pelvis and becomes less retroverted. "By the time fetal kicks can be felt by the mother (around 20 to 22 weeks gestation), the uterus is way above the pelvic brim," she says.

If you do need a C-section, it's unlikely that your tilted uterus will be the reason for it. According to What to Expect, because your uterus won't be tilted one way or the other after the first trimester, your pregnancy will progress as normal, meaning you're just as likely to need a C-section as someone who doesn't have a tilted or retroverted uterus. The American Pregnancy Association also noted that a tilted uterus has no effect on your labor or delivery, and won't make either more difficult.

So if you're worried about a C-section, talk to your healthcare provider. According to Mayo Clinic, a stalled labor is one of the most common reasons for a C-section and, luckily, your tilted uterus probably won't cause a stalled labor. Come up with a birth plan, learn about any potential issues that could arise and lead to a C-section, and try not to panic. C-sections happen for a ton of reasons, and most are out of your control, but you can rest easy knowing your tilted uterus doesn't sentence you to the operating room.