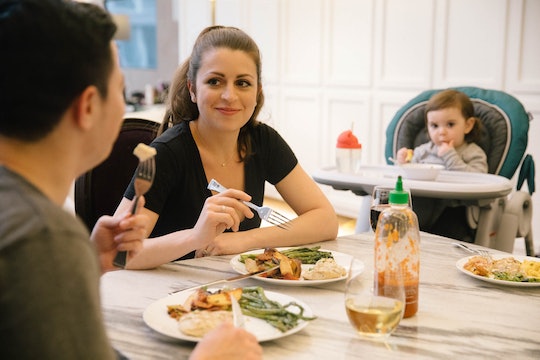 Do Your Pregnancy Cravings Influence Your Child's Tastes?

The common saying, "you are what you eat" has been around for generations. But what does that mean for pregnant women and their babies? Do your pregnancy cravings influence your child’s tastes?

A study conducted by Dr. Julie Mennella of the Monell Chemical Senses Center in Philadelphia tested whether or not flavors from the mother’s diet during pregnancy, which are transmitted to amniotic fluid and swallowed by the baby, affected the baby’s tastes after they were born. The study concluded, "These very early flavor experiences may provide the foundation for cultural and ethnic differences in cuisine."

How did the researchers come up with this conclusion? Pregnant women (who were planning on breastfeeding) were randomly assigned into groups, where they either drank 300 milliliters of carrot juice for four days per week for three consecutive weeks during their last trimester, or they drank only water. This study was originally conducted to also see whether the same flavors babies tasted in the womb could be tasted in breast milk, and whether it affected the infant’s enjoyment of certain flavors.

So how did they know whether the babies liked the flavors or not? It was based on each baby's facial expression while eating different flavored cereal.

"Previously exposed infants exhibited fewer negative facial expressions while feeding the carrot-flavored cereal compared with the plain cereal, whereas control infants whose mothers drank water during pregnancy and lactation exhibited no such difference … moreover, those infants who were exposed to carrots prenatally were perceived by their mothers as enjoying the carrot-flavored cereal more compared with the plain cereal," the study noted.

How does your baby taste what you’re eating in utero? Apparently, they’re drinking flavored amniotic fluid. Mennella did another study where she took samples of women’s amniotic fluid after they ingested either garlic capsules or sugar capsules. She then asked a "panel of judges" to pick out who ate the sugar, and who ate the garlic.

In an NPR article summarizing the findings of Mennella’s study, NPR said in the ‘60s and ‘70s, Mennella came up with the idea to do these tests from dairy farmers who were trying to figure out if what their dairy cows ate affected the way the milk tasted. And they found that when cows ate garlic and onion, or lived in a stinky barn, that each batch of milk tasted differently.

Also according to the NPR article, Mennella said that "not only is the amniotic fluid and breast milk in humans flavored just like [the] cows, but the memories of these flavors are formed before [the baby is born.]"

So, should you start stuffing your face with veggies so your kid is a healthy eater? Not necessarily. Everything in moderation. If you want your kid to like veggies after they're born, it wouldn't hurt to eat more broccoli, but you obviously want them to have a taste for Twinkies, too. (Duh.) If you want them to love your particular cultural flavor of food, eat a lot of that while you’re pregnant so they’ll subconsciously have memories of that from the womb.

Or, eat whatever you want and trust that your kid is going to do the same. I mean, even if all you eat is Brussels sprouts, who says your kid will choose those over macaroni and cheese in two years? (That will literally never happen.)

More Like This
53 Rainbow Baby Names Filled With Hope
Is Ginger Tea Safe During Pregnancy? Experts Weigh In
How Pregnancy Affects Your Teeth
Can You Have Sex With Placenta Previa? Experts Explain