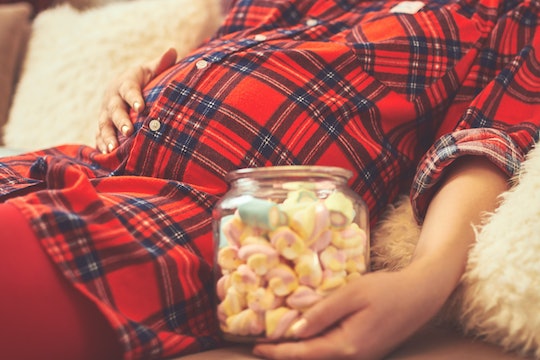 Do you remember the, ahem, iron-forward notes when drinking water from the old water fountains in elementary school? If you have a similar taste in your mouth but haven’t been eating or drinking anything unusual, a change in taste buds can be a sign of pregnancy. And while it may not be the first sign you get of having a baby on board, it’s thought to be caused by the same bodily changes that cause morning sickness.

What to Expect’s website reported that many expectant women experience a metallic or sour taste in their mouths, even when they’re not eating. This change in taste is called dysgeusia, and is believed to be caused by all the hormonal changes in the body during the early stages of pregnancy. Estrogen is most likely the culprit, since it’s thought to play a role in taste anyway.

“There’s not great data on exactly why this happens, but there are several theories,” says Marta J. Perez, MD, OB-GYN at Baptist Health in Jacksonville, Florida, in an interview with Romper. “One of the most dramatic changes early in pregnancy is that estrogen and progesterone go higher than they ever have before. There have been some studies that show taste buds in animals change size and shape during pregnancy.”

Because these hormonal shifts also lead to other symptoms, like nausea, morning sickness, and intense sense of smell, they all tend to start around the same time. Because of this, a funny taste in your mouth probably won’t be the first sign you’re pregnant.

“We tend to peak in morning sickness later in the first trimester at the eight to 10-week mark, and most women find out they’re pregnant around six to eight weeks, after that first period is missed. It wouldn’t be the most reliable or one of the first signs,” Brittney Pohler, PA, OB-GYN at Baylor Scott & White Health in College Station tells Romper.

Also, pregnancy isn’t the only thing that can cause your taste buds to change. Pohler says there are numerous other reasons, from medication changes to harsh chemical exposure.

“I would not use this as a reliable indicator to diagnose pregnancy. There are a lot of things that can cause your sense of taste to change. Medications are a big one I see — there’s an antibiotic we commonly use for vaginal infections that can give metallic taste in the mouth. Taste can change if you have nasal polyps, a cold, upper respiratory or sinus infection, dental problems, mouth or gum disease, chemical exposure, and even illicit drug use.”

However, women who have had children before may recognize the taste and be clued in sooner that they’re pregnant than women who may not connect a funny tasting coffee with pregnancy right away. “Most women don’t experience them until around the six-week mark when they’ve already missed a period. But I’ve certainly talked to women who have said, ‘Oh, I had my coffee and it tasted bad, so I took a pregnancy test,’” says Perez.

Both docs agree that their patients who report taste changes usually have to lay off coffee for the first trimester. “I would say coffee is probably the biggest one,” says Perez. “I have a lot of women who say they love coffee but they can’t handle it in the first trimester. Other things are things that are very strong in any way, so strongly sour or sweet is too much, and they find neutral flavors, like bread or crackers, to be more palatable. A lot of these changes tend to return to normal in the second trimester, but for some women their tastes change until after pregnancy is over.”

Pohler says sadly, it’s usually some of a woman’s favorite foods she doesn’t like the taste of for a while. “I commonly hear of aversion to meat. Coffee is another that I hear from my patients regularly. Most commonly I hear people complain of things tasting bitter or sour, and they have less of a sweet response.”

For most women, taste issues resolve in the beginning of the second trimester, or in rare cases where it lasts longer, soon after delivery. Both experts have a few tips for getting through the funky tasting period until that resolution comes. “If you get nauseous from your aversion, we can definitely give medications to help with that morning sickness. If it’s just an aversion to a type of food, I tell them to hang in there and wait it out,” says Pohler.

“Stay away from the things that can make you sick, especially if that bad taste is triggering nausea or vomiting,” Perez says. “Changing your prenatal vitamin is something you can try, and I have had some women have some success reducing the metallic flavor that way. If you drink more acid-based juices or eat more vinegar-based dressings, they actually help with that metallic taste. The rest is just a waiting game, and often these changes go away between 12 and 14 weeks.”