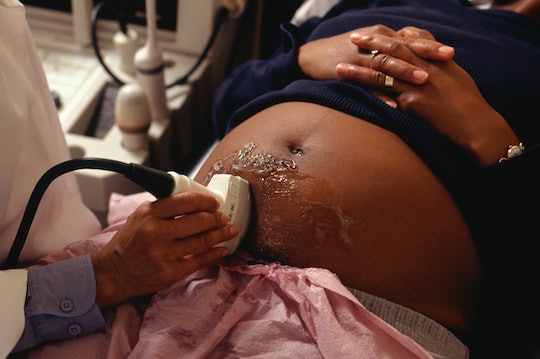 Dr. Chaniece Wallace died on Oct. 22, two days after giving birth to her daughter via C-section four weeks before her due date in November, according to a GoFund Me page set up by her husband, Anthony Wallace. Dr. Wallace had to deliver early after she developed symptoms of preeclampsia.

According to the Mayo Clinic, preeclampsia is a pregnancy complication that can cause high blood pressure. Other symptoms include weight gain, trouble breathing, nausea, and headaches, as March of Dimes explains. More extreme symptoms could be liver or kidney damage, stroke, seizure, and blood clot problems. If left untreated, the condition could lead to early delivery or become fatal.

Dr. Wallace, who was a chief resident at Indiana University School of Medicine Pediatric Hospitalist with Indiana University Health Physicians, underwent surgery to address the complications she was experiencing. "My wife Chaniece had to endure surgery due to complications developing in her body," her husband wrote on the GoFundMe page. "Three of the main challenges we encountered were a ruptured liver, high blood pressure, and kidneys were not fully functioning."

Tragically, Dr. Wallace died two days after welcoming their daughter. "Chaniece fought with every piece of strength, courage, and faith she had available," her husband wrote.

Dr. Wallace's heartbreaking and untimely death has once again put a spotlight on the distressing fact that Black women are three to four times more likely to die from pregnancy-related conditions than white and Hispanic women, according to the Centers for Disease Control and Prevention (CDC).

Reasons for this disparity are "complex," ranging from access to health care during pregnancy and implicit bias among health care providers, according to the American Health Association. But Dr. Ana Langer, director of the Women and Health Initiative at the Harvard T.H. Chan School of Public Health in Boston, told the organization the bigger problem to address is that "Basically, Black women are undervalued. They are not monitored as carefully as white women are. When they do present with symptoms, they are often dismissed."

In an Instagram post honoring Dr. Wallace, Health In Her HUE, a platform that helps "connect Black women to Black and culturally competent healthcare providers," said that "childbirth isn’t safe for Black women" in the United States. "We say protect Black women because we need it, we really need it. We’re in this FOR US as Black women and we know that we can’t ever stop. We can’t stop until every one of us, are safe, protected, and uplifted. This is our lives and our tribes on the line," the post continued.

Dr. Wallace's husband described her as a "warm soul, welcoming to almost everybody" and promised to keep his wife of five years in his heart forever. "Not only loved by family and friends but individuals she would encounter in the patient population. She had a special way of being empathetic with her patients and making each one of them feel special," he wrote on the GoFundMe page.

"Chaniece although you are not with us physically, I will always carry you in my heart and share my wonderful memories of you with our daughter Charlotte," he continued. "I am forever grateful for the five years God gave me with you."