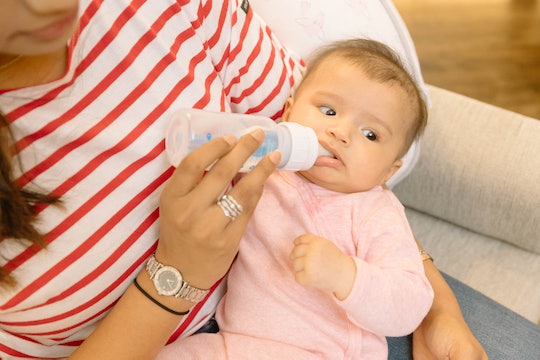 What Your Baby May Notice About Supplementing With Formula

Breastfeeding moms know that even if they plan on breastfeeding 100 percent of the time, there are instances that require supplementing breast milk with formula. It can make some moms feel guilty (although it shouldn't), and others just might be relieved. But what about babies? Does a baby know if you’re supplementing with formula?

When my daughter was a few months old, I ended up having to take care of my father in the hospital for a few weeks. My breastfeeding routine continued and I pumped when I could, but sometimes I just had to give her formula and hand her off to my husband with a bottle in hand. I could tell by the look on her face the first time she tasted formula that she was bewildered. I don’t know if it was due to the bottle, the taste, or the consistency of the formula, but she drank until she was full, and luckily she didn’t fuss over it at all.

If your baby has been exclusively breastfed, then the introduction of a bottle might be confusing and the first change your baby notices. According to Mother and Child Health, some babies who have never been introduced to a bottle before may become nipple confused and even refuse to bottle feed. If your baby refuses to bottle feed consistently, the article suggested trying to use a cup, spoon, dropper, or a nursing supplementer attached to your finger. Baby Center also noted that if you supplement with a bottle routinely, then your baby may reject the breast because bottle feeding will give the baby a faster milk delivery.

Will your baby notice a difference in taste? Babies have all five senses of taste — umami, sourness, bitterness, sweetness, and saltiness (which develops after four months), explained Parenting Science. And since breast milk, according to The Guardian, has 10 times more glutamate than cow’s milk, which falls under the umami (protein sensing taste buds), babies may taste the difference when the milk is changed.

What about the smell? If you’ve ever taken a whiff of breast milk, you may have noticed a sweet or nutty vanilla aroma, but formula smells a little more robust. Parenting Science mentioned a 2005 study that found when babies were presented with the two smells of breast milk and formula, most of them preferred the scent of breast milk.

Your baby may also feel fuller when you supplement with formula. According to Baby Center, breast milk is more easily digested by your baby because it contains more whey than casein, unlike formula. The slower digestion of formula, the article explained, can make some babies feel full for longer periods and increase the time between feedings.

Other than the temporary adjustments babies make, they may not have a conscious, emotional reaction when being supplemented with formula, other than the exclusively breastfed babies who might miss the skin and breast contact during feedings. Babies are amazing and resilient beings, and have the capacity to adjust, even if their favorite snack tastes a little different.