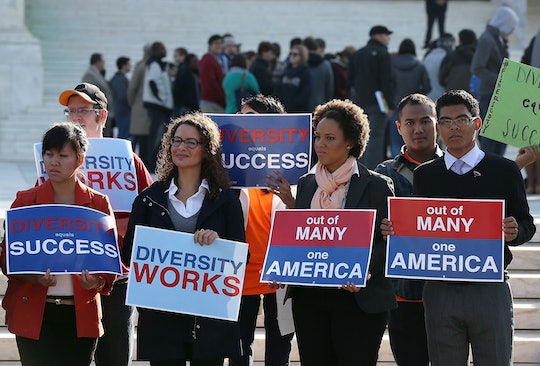 Update: The Department of Justice emailed the following statement to Romper on behalf of Spokeswoman Sarah Isgur Flores:

Press reports regarding the personnel posting in the Civil Rights Division have been inaccurate. The posting sought volunteers to investigate one administrative complaint filed by a coalition of 64 Asian-American associations in May 2015 that the prior Administration left unresolved. The complaint alleges racial discrimination against Asian Americans in a university’s admissions policy and practices. This Department of Justice has not received or issued any directive, memorandum, initiative, or policy related to university admissions in general. The Department of Justice is committed to protecting all Americans from all forms of illegal race-based discrimination.

Previously: After the Civil Rights Act made racial discrimination in the workplace illegal in 1964, it wasn't until 1978 that courts evaluated racial discrimination in higher education. A Supreme Court case that year ruled race can be used as a factor in college admissions, but that racial quotas in higher education violated the Equal Protection Clause of the Constitution. According to FindLaw, affirmative action policies arose out of a need to encourage diversity in both the workplace and education while still operating within the legal limits of the Civil Rights Act.

A common misunderstanding about affirmative action is that it's "reverse discrimination" by favoring students of color over white students, but it's actually about leveling the playing field for all students.

The Civil Rights Act and by extension, affirmative action, exist to break down institutionalized racial barriers to equity. To say that affirmative action harms white students is to be dismissive of the benefits and opportunities that attending schools with diverse cultures and environments afford. Affirmative action prepares all students for the diversity of the real world post-graduation, at a time when the American population is more diverse than it ever has been in history, according to the U.S. Census Bureau.

If appears to the Trump administration as though admissions of white students are down in favor of students of color, then it's not looking at the entire picture of America, as the number of minorities have been rising at rates faster than whites, The Hill reported last year.

Investigating and litigating colleges and universities trying to level the playing field for all applicants is an erroneous and wasteful use of DOJ resources, especially when the Supreme Court has weighed in on the issue multiple times since 1978. That the DOJ should investigate college admissions almost makes about as much sense as the Department of Education's complete overhaul of its campus rape policy.