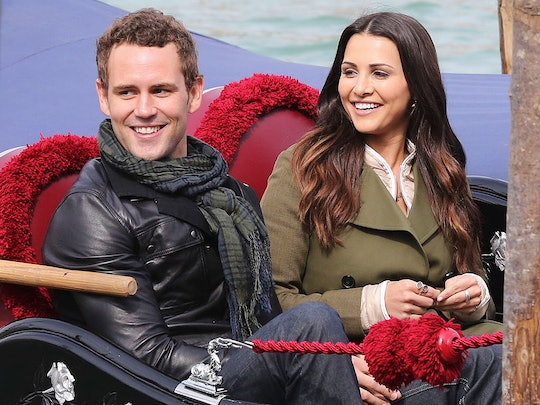 The Bachelor's most recent episode ended on a major cliffhanger, and that's saying something in a season where nearly every week ended with a twist or a "To be continued." Suffice it to say, the final moments of the Feb. 20 episode took the cake: former Bachelorette (and Nick Viall's ex) Andi Dorfman unexpectedly showed up at his door prior to the post-hometown dates rose ceremony. Understandably, viewers went mad trying to figure out what she could possibly want. Right now, many are wondering whether Andi Dorfman wants to get back together with Nick on The Bachelor.

On the one hand, it's totally possible that Andi's intention in showing up randomly to surprise Nick is to win him back. Past contestants have spontaneously joined the show midway through in the hopes of competing for a chance at love once again. In fact, that's exactly what Nick himself did when he joined Kaitlyn Bristowe's season of The Bachelorette (his second of four times appearing on a Bachelor Nation show). But Nick joined Kaitlyn's season in the fourth week of the show, and Andi is showing up in the second-to-last week. Logically, it doesn't make a ton of sense that she'd wait that long or expect Nick to up and ditch all of the other women he'd spent two months wooing.

Also, on a surface level, her "Hello, Nick" greeting sounded kind of... mean. It wasn't the type of sultry and/or loving "Hello" I'd imagine someone giving an ex that they were about to try to win back. I'm pretty sure she was even sneering.

In all likelihood, Andi's appearance is more like Jake Pavelka, the former Bachelor who randomly popped up at the start of JoJo Fletcher's Bachelorette season. As far as I know, the two barely even knew one another, and his appearance was teased as if it were him looking to join JoJo's group of contestants. In the end, he stopped in for about ten seconds to impart some Bach wisdom — though I'm still not really sure why JoJo would ever want wisdom from someone who failed to make a lasting match on the show.

Despite the fact that things were contentious for a long time between Andi and Nick after he called her out for "making love with him" while not being *in love* with him when he appeared on her season of the show, they seem to have mended fences. That's surprising, given that Andi wrote some not terribly flattering things about Nick in her tell-all, It's Not Okay, including the fact that the two of them had had "cringeworthy" sex in the fantasy suite. So much for "making love."

Though their history has been tense, it'll be interesting to see the two of them come face to face to discuss their past and Nick's time on the show. Based on the promo for Monday's episode, things will get serious real fast. Nick can be heard saying "This is very unexpected" and "What did you expect me to say?," while Andi implores him to "be honest." Clearly, Andi is still rooting for Nick to find love. She even recently told TMZ that, though she's done with Bachelor Nation herself, her fingers are crossed that Nick settles down with the woman he chooses.

Interestingly, there's one unexpected Nandi 'shipper still holding out hope: Josh Murray, the man Andi chose over Nick on Season 10 of The Bachelorette. Josh told ET Online that he thinks Andi and Nick are "perfect for each other" and should have ended up together. Though, based on Josh's history with both of them, I don't think he necessarily meant that as a compliment. Regardless, I'm excited to see how this all plays out.